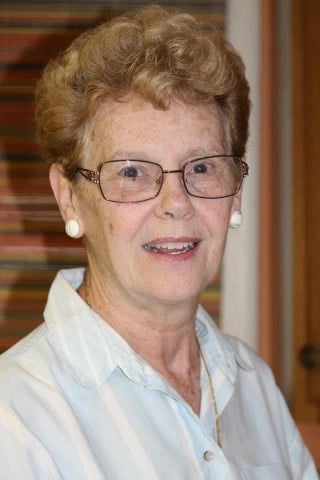 She was born New Year’s Day, 1933 in McMechen WV, daughter of the late Richard and Sara Ellen (Porter) Straughn.

Patricia graduated from St. Joseph’s Academy, in 1951, and was a member of St. John’s Catholic Church, where she worked as a priest’s assistant, starting with her friend, Father Ron.

She loved many things in her lifetime including: bingo, pinochle, clowns, Benwood, Post Office memorabilia (as a nod to her Postmaster husband, Jim), Norman Rockwell, Picasso, painting ceramics, Coleman’s fish and her eyes lit up at the mention of ice cream.

Patricia will be interred at Mt. Calvary Cemetery with a graveside service to be held at a later date, which will be announced by her family when details are finalized.

So sorry Brenda and Brian. I have great memories of being at your home when I was young and your mother was always the kindest.

Our sincere sympathy and condolences to your family. Remembering both of your parents.
The Skvarka family, Center Benwood

Brenda and Brian and families, I am so sorry for your loss. Your mom was such a sweet lady. I remember her so fondly. Loved hanging out at your house as a kid!

Prayers to Brenda, Brian & your families. Your Mother brought smiles & laughs to many. She was a woman who was determined to get her driver’s license. I had the patience & pleasure of teaching her. She was so happy when she passed her test & got her license. I was happy & proud of her! She drove many places on her own & was so happy to do so. I remember her many visits to Larry’s & always being so happy! Rest in Peace Patricia!

Brenda, Sorry for your loss. Patty was a great neighbor. Thoughts and prayers sent to all.

Brian and Brenda, sorry for your loss. So many fond memories of your mother.