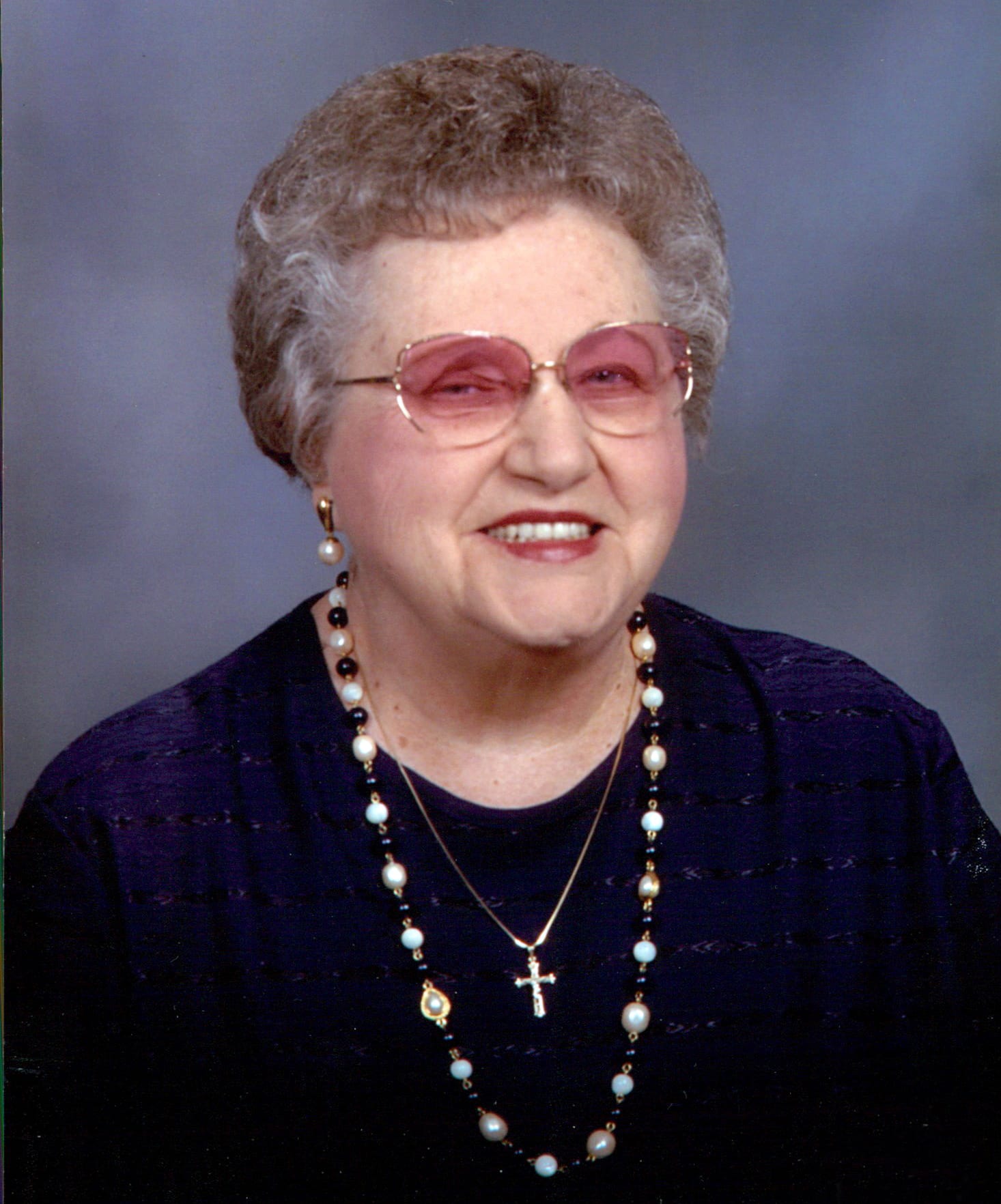 SHUTLER, Pearl Isabelle, 88, of Wheeling, W.Va., died Saturday, June 13, 2015 at Wheeling Hospital.
She was born August 31, 1926, in Wheeling, a daughter of the late Harry J. Nolte. She was Catholic by faith and a past member of NARFE (National Association of Retired Federal Employees) and a current member of the Marshall County Senior Citizens. She was a former employee of Bloch Brothers Tobacco and was retired from Stone & Thomas.
In addition to her father, she was preceded in death by her husband, Robert J. Shutler Sr. in 2003, and one son, William “Billy” Shutler.
She is survived by one daughter, Janet D. Shutler of Wheeling; one son, Robert J. Shutler Jr. of Glen Easton, W.Va.; two sisters, Mildred (George) Custer of Wheeling, and Marlene (Roger) Stewart of Bridgeport, Ohio; three grandchildren, Joseph Andlinger Jr., Jennifer (Andlinger) Turkington, and Jarrod Andlinger; two great grandchildren, Adam and Allison Andlinger; several nieces and nephews; and a special cousin, Charles Nolte.
Friends will be received on Tuesday, June 16, 2015 from 2-4 & 6-8 pm at the Altmeyer Funeral Home, Elm Grove Chapel, 154 Kruger Street, Wheeling, where a vigil service will be held at 6 pm. Mass of Christian Burial will be celebrated on Wednesday, June 17, 2015 at 10 am at Our Lady of Peace Catholic Church, Wheeling, with Rev. Dennis R. Schulekens Jr. as celebrant and Rev. Bakhos Chidiac as concelebrant. Interment will follow in Greenwood Cemetery, Wheeling.
Online condolences may be expressed to the family at www.altmeyer.com <http://www.altmeyer.com>

Janet and family, We were so sorry to hear of your mom’s passing. We will miss seeing her and chatting with her at the little ones party. She was a good person and will be missed. Our prayers are with you all.
Love,
Frank and Margie Cooke

We bowled with your mom and your dad many many years ago with the Hill Bucs and loved them dearly. So sorry for your loss but now Pearl is united with Bob again also with Holly , Jean and Chuck .

Bobby, so sorry to about your Mom,I know what its like i lost my MOM a year ago the 11 of June, well take care o buddy & tell the rest of the family that i’m sorry about there loss to, take care, Tom……

Bob and Janet, I am so sorry to hear of the passing of your mom. I pray for your comfort knowing she is with her Lord and you will be with her again one day. There is nothing like a mother’s love. Share stories of her that make you smile. May peace be with you. I send my love to you all. Debbie

My sincere and deepest condolences to the family of Mrs. Shutler. Denny Albaugh