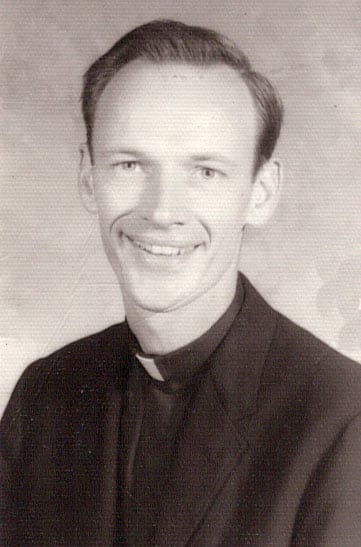 Father Cupp was born March 10, 1939, in Wheeling, a son of the late Edwin T. and Gertrude (Schiffer) Cupp. He was a veteran of the U.S. Army Reserves; received a Bachelor of Science degree from Wheeling College; and completed his theological studies at Mount St. Mary’s Seminary in Emmitsburg, Md.

In addition to his parents, he was preceded in death by his brother, Robert Cupp; a sister, Angela Fahey; and two sisters-in-law, Mitzi Cupp and Bonnie Cupp. He is survived by his three brothers, George (Patricia) Cupp of Wheeling, James Cupp of Florida and Tony (Kathy) Cupp of Wheeling; a sister-in-law, Janet Cupp of Wheeling; and several nieces and nephews.

I remember Father Cupp & his parents well. I grew up just 2 doors up from the Cupps. What a wonderful family! I still remember the day he was ordained, my Mother took me and you could feel the power of God’s love in the church. I am thankful that Father Cupp has found the peace he deserves, may he rest in peace and may God comfort his family at this difficult time.

Uncle Eddie was my godfather. When I was a young boy, I remember great joy and happiness being with him. Because of Uncle Eddie and the Church, I considered becoming a priest. I wish I’d known him better. I am sure he has a place with Jesus.

Uncle Eddie was my godfather. When I was a little boy he used to make me laugh when he shook my hand and told me it was like shaking a dead fish….which I didn’t understand but made me laugh; but we’d continue shaking hands and my “dead fish” grip would get even more so as I laughed and Uncle Eddie would shake my hand all the way up my arm as I laughed and giggled loving my uncle and godfather, the priest.

I am picturing quite a Schiffer reunion going on!! Schnitzelbank and euchre all around.

I am so sad to see Uncle Eddie move on from us. But I know that he has found the peace that he has always deserved.

May your memories of Rev. Edwin Francis Cupp, give you peace, comfort and strength…