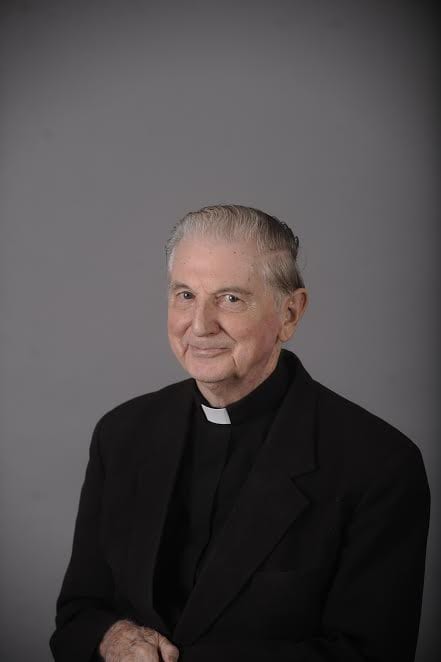 Throughout his priesthood, Father Maguire was dedicated to the ministry of missions all over the world and to the people they served. He was also a beloved pastor of a number of parishes in the Diocese of Wheeling-Charleston across West Virginia, and is fondly remembered by the faithful.

Father Maguire was born in Dublin, Ireland, Oct. 10, 1925, to the late James and Elizabeth (Moore) Maguire. In addition to his parents, he was predeceased by his brother, Rev. Aidan Maguire. He is survived by his sister, Mrs. Bernadette Mary “Bernie” (Hugh) Savage of England. He is also survived by a niece, Mrs. Hilery Turner, of England and a nephew, Mr. Vincent Savage of Holly Springs, N.C, and many other nieces and nephews.

Father Maguire completed his preparatory studies for the priesthood at St. Patrick College in Thurles, Ireland, in 1953. He was ordained a member of the Pallottine Fathers by Archbishop Jeremiah Kinane at St. Patrick Cathedral in Thurles, County Tipperary, Ireland, June 14, 1953. Following his ordination, Father Maguire worked in the mission of East Africa from 1953 to 1963. He then worked on mission appeals throughout the U.S.

In 1965, Father Maguire came to the Diocese of Wheeling-Charleston and served at Sacred Heart Parish in Powhatan, W.Va. He was incardinated into the diocese in January 1976 by Bishop Joseph H. Hodges. After his 11 years as pastor of Sacred Heart, he was assigned to Scarbro, now Oak Hill, W.Va., from 1976 to 1987, where he served two terms as dean of the Beckley Deanery. He also served as pastor of St. Francis de Sales Parish in Beckley, W.Va., from 1987 to 1990. He was then appointed to St. Thomas Parish in Gassaway, W.Va., from whence he retired in 1994 to work on missions in Trinidad for 12 years. He then went on to reside at the Welty Apartments in Wheeling.

Burial will be at Mount Calvary Cemetery in Wheeling.

Thank you Fr. Maguire for everything. I will never forget you. Rest In Peace

Gr8. Maguire was a true”man of God”. He gave his entire life tho GOD’S service. I got to know him at good shepherd and lived his gentle soul. He would pout his hand on my head and bless me!