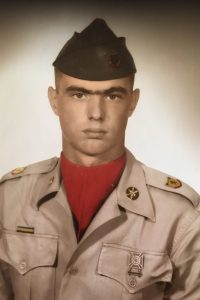 Robert was born March 27, 1947, in Islip, NY, a son of the late Earl S. and Marion (Dobbins) Nettles. He was a retired truck driver for Highway Transport, Lexington, KY; a member of Our Lady of Peace Catholic Church; a U.S. Army veteran; and an avid Pittsburgh Steelers fan.

In addition to his parents, Robert was preceded in death by his loving wife of 50 years, Saundrae K. (Starkey) Nettles, in 2015; a son, Robert A. Nettles, Jr, in 2014; and a brother, Earl Nettles. He is survived by two children, Cassaundrae Nettles of Benwood and Shawn (Lori) Nettles of New Jersey; a daughter-in-law, Jennifer Henry Nettles of Wheeling; a sister, JoAnne Singer of Myrtle Beach, SC; a brother, Linwood (Sandy) Nettles of Florida; and four grandchildren. He is also survived by his loving dog, Izzy.

Friends will be received from 6-9 pm, Sunday, at the Altmeyer Funeral Home, 1400 Eoff Street, Wheeling, where a vigil service will be held at 7:30 pm. Mass of Christian Burial will be celebrated at 10 am, Monday, January 21, 2019, at Our Lady of Peace Catholic Church, with the Rev. Dennis Schuelkens, Jr. as celebrant. Interment will be private and held at the convenience of the family.

To the family of Robert Alan Nettles Sr. May you find comfort in knowing that your dear one is safe in the memory of God, who will remember every detail about him and bring him back again.” Isaiah 25 verse 8.

Cassie and Abbey, you have been in our thoughts and prayers. We will definitely miss Bob. He was my buddy. I’ll miss all our chats.

So sorry for your family’s loss.

May your memories of Robert Alan Nettles, Sr., give you peace, comfort and strength…

Bob was a loving husband, father, and grandfather as well as a blessing to all who knew him. I’m so glad I got to know him. Love and prayers to his family.

Thoughts and prayers to the whole Nettles Family. Bob and his larger than life heart will be missed by everyone who had the gift of knowing him. I know the OLP school community and Bethlehem Softball League will dearly miss him. Bob, I promise to do a better job of not losing Abbie’s registration check for this season! Maybe I’ll just have Cass give it to my wife like you suggested!

I had many discussions with Bob on the OLP playground benches while watching our granddaughters play on the equipment he donated in his wife’s memory.
I’ll remember him fondly may he RIP
Sorry for your loss Cassie & Abby

Bob,
Softball season is not going to be the same without you. I’ll do my best to help Miss Abby work on her game and I’ll try to check on your girls as much as I can.