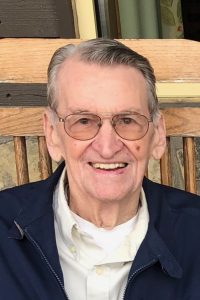 Robert (Bob) “Nig” Niggemyer, peacefully passed away at his home in Wheeling on Monday surrounded by his loving family at the age of ninety.
He leaves behind many beloved family members, friends, pals, acquaintances, winners, his favorite Iron City mug and people whom he was “glad that they got to see him again”.
Bob was born on October 14th, 1928 and was one of six children of Bernard, Helen and Margaret Niggemyer. A 1947 graduate of Wheeling Central, Bob soon after joined the United States Army, serving proudly as a “mess hall” Sergeant. Following his service in the Armed Forces, he began a career as a member of Local 83 Plumbers and Steamfitters Union where he would remain until his retirement.
In addition to his career, Bob also had many fulfilling pastimes including founding and coaching the rugby program at Wheeling Jesuit College. He was also an active member of many civic organizations and raised innumerable funds on behalf of the Knights of Columbus, Wheeling Central Boosters, Elm Grove Civics, Elm Grove Eagles, Warwood Vets, Cave Club and WV Snakes Club. He was a lifelong Notre Dame and Pittsburgh Steeler fan and never missed a Sunday mass, no matter where in the country he might be.
Preceding Bob in death were his parents and siblings; George Niggemyer, Bernard Niggemyer Jr., Edward Osterman and Margaret Shephard.
Surviving Bob is his “lovely bride” of 67 years, Patricia “Patty” (Seabright) Niggemyer, three siblings, Mary Elizabeth (and the late Edward) Trischler, Paul (Julia)Niggemyer and Ralph (Martha) Niggemyer, sister-in-law Renee Niggemyer, three daughters, Pam Brown (the late Lloyd Brown), Robin (Mike) Posey, and Beth Brinker (the late Rick Brinker), seven grandchildren, Adriane Brown, Travis (Kayla) Brown, Arica (Scott) Holt, Ryan Posey, Chris (Tiffany) Brinker, Bethany (Justin) Link, and Jason (Whitney Scholl) Owens and was a proud PaPa to seven great-grandchildren – Alden and Gabriel Brown, Taylin and Blaise Holt, and Nathan, Lily and Molly Brinker, several nieces and nephews and a lifelong best friend, Bob Morgan.
Visitation will be at Altmeyer Funeral Home, 154 Kruger St., Elm Grove on Thursday, May 2nd where friends will be received and stories shared from 2-4 and 6-8. Mass of Christian Burial will be celebrated on Friday, May 3rd at 11am at St. Michael Parish, burial to follow in Mt. Calvary Cemetery.
The family is asking that in lieu of flowers, a donation be made to Valley Hospice, 308 Mount St. Joseph Road, Wheeling, WV 26003 who offered, not only care to Bob, but comfort to the family who would like to personally thank Angie, Courtney and Jane.

He seemed a great man, with a long and full life. Peace upon those who knew and loved him, till you meet again.

My sincere and deepest condolences to the family and friends of Bob. Denny Albaugh

My condolences to the family of Bob (niggie ) he will be missed by all his friends at the Cave Club . I will always remember him at the meetings and no matter whether we disagreed or not he would still laugh about eventually and he would call me sonny boy and tell me to pay attention .He was a great guy and good man . God bless him , and I’ll pray he’s at peace.

May your memories of Robert Niggemyer, give you peace, comfort and strength…