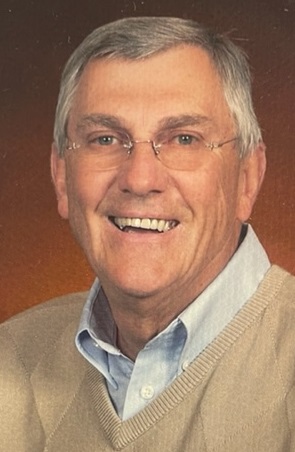 He was born in Glen Dale, WV on January 10, 1939, a son of the late Homer and Vera (Church) Blake. Roger was a member of Simpson United Methodist Church. He was a 1957 graduate of Cameron High School and retired from Bayer after many years of services. Roger was an avid golfer and a member of the Moundsville Country Club.

In addition to his parents he is preceded in death by his son, Jeffery Blake and his brother, Marvin Blake of Belpre, OH.

Roger is survived by his loving wife of 62 years, Priscilla “Perky” (Nation) Blake; his daughter Stephanie Madden of Moundsville; his granddaughter, Paige Och of VA and a great-grandson on the way.

Family and friends will be received for a memorial service at a later date and time to be determined.

In lieu of flowers memorial contributions may be made to Simpson United Methodist Church by clicking here.

Many blessings to the Blakes. I am sad to know that only one of my mother’s cousins is left.

I had the privilege of working with Roger in New Martinsville. He was a great coworker, mentor, and colleague. He took me aside many times and helped guide and mature my management skills. Kind and generous soul. My condolences and prayers to his wife and family.

So sorry to hear of Rogers’s passing. He was a great mentor to me while I was at Bayer in New Martinsville. Prayers to his wife and family.

I learned so much from working with Roger. Always a great source of advice. He was such a joy to work with and to just be around.

He truly did have a great sense of humor.

A good man who supported all who worked for him at Mobay.

Sorry about Roger. Two of my earliest memories of Roger was coaching Pee Wee baseball against him when I was a mere teenager, and his refereeing rec league basketball along with Bernie Young, too many years ago. Thanks for being a part of those simpler times. My condolences go out to all of his family and many friends. The world needs more Roger Blakes

Roger was unique. His sense of humor and joy of life were an example. He will be missed. He was a good man.

Dear Perky and Family, I am so sorry to read this. It took me a few years to get all my cousins from my great aunts sorted out. I remember Roger always had a smile on his face. As a youngster, I remember he seemed like a giant to me—a very kind and friendly giant. I can only imagine your feelings of loss. May God richly bless you and guide you through this difficult time. Roger is with the Lord he loved throughout his life.

So sorry, sending prayers and comforting thoughts to and your family. God bless you.