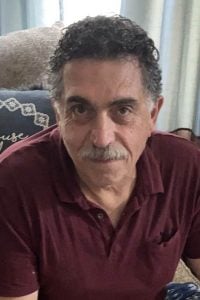 Ron was born December 22, 1950, in Wheeling, West Virginia and was the third out of seven children. He lived his entire life in Wheeling. He was a graduate of Wheeling Central Catholic High School, then he attended a trade school and became a machinist. He worked for Wheeling Pittsburgh Steel for 42 years and loved every day of it.

Ron was preceded in death by his father, Loreto; mother, Delfina; brothers, Larry and Robert.

He was a member Sacred Heart Church and then St Alphonsus. He enjoyed the great outdoors and hunting. He loved going to antique cars shows and working on cars. And was always up for a good cup of coffee. But what he loved most was spending time with his family and sharing all of his knowledge with whomever would listen.  He loved making a play on words and cracking jokes. Which his family called “Ronisms”.

Family and friends are invited from 2 to 7 p.m. on Wednesday, September 15th at Altmeyer Funeral Home, 1400 Eoff Street, Wheeling with the service at 7:00 p.m. with Rev. Joseph Wiley officiating.

Deeply saddened by the news of Ronnie’s passing. Sincere condolences to Marlene and family.
RIP my friend.

Sorry for your loss. Been thinking of you
And all our good times . Thoughts &prayers . May he rest in peace .know he us with u i. Spirit

My sincere condolences go out to Marlene and family. May God Bless you and comfort you and help you through this most difficult time

Samantha and family, I was saddened to read of your Dad’s passing. Know that you are in my prayer.

many memories, building a cabin in North Wheeling as teenagers, running around on motor a scooter, or bringing your first car down suicide hill to Morth Wheeling when you were 15, you will forever live in my heart. our condolences to the family.

Thoughts and Prayers for Ron and his family. He’s been my good friend for more than 50 years. He will be missed by all who knew him. RIP, my friend.

To the whole DeGasperis family. We send our deepest sympathy and prayers for the family. Ronnie’s passing came as a shock. He was such great guy and we had a lot of good times growing. He’ll surely be missed and remembered by all.

I am truly sorry to hear of the loss of Ron. I will never forget his kindness. My sincere condolences.