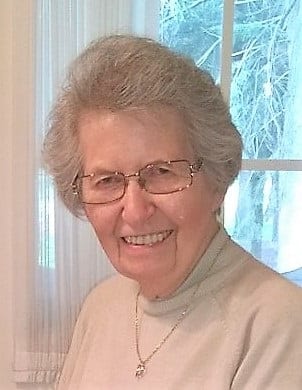 ROSEMARY GOMPERS KELLY of Wheeling passed away March 12, 2018, at the age of 93, after a brief illness.  She was born January 21, 1925, the third child of the late William J. Gompers and Rose Wilhelm Gompers.  A lifelong member of St. Michael Catholic Church, Rosemary graduated from Central Catholic Grade School and Mt. de Chantal Visitation Academy.

On June 18, 1945, she married her husband, Edward F. Kelly (who passed away in 2003) and together they raised four children.  As her children grew, Rosemary became involved in St. Michael’s Grade School and was one of several mothers who developed the school’s library. A longtime member of Catholic Daughters and Christian Mothers, she also volunteered her time as a Girl Scout leader and for many years delivered Meals-on-Wheels.

In her earlier years, Rosemary enjoyed sewing, knitting, and crocheting, especially afghans for her children and grandchildren.  She also was an accomplished watercolor artist and loved taking art classes at Oglebay Institute.  Her paintings, along with memories from the classes, gave her enjoyment that lasted the rest of her life.

Rosemary was an avid college football fan.  This interest developed in the 1940s during frequent trips to Notre Dame with her father, to watch her brother Bill Gompers play for the Fighting Irish.  Later, when her children attended WVU, she would buy season tickets and attend all of the Mountaineers’ home games.

While others would lament the coming end of summer, Rosemary would joyfully announce that college football would soon begin.  Every Saturday at 11 am during football season, Rosemary would turn on three TVs and follow various games simultaneously, often while painting or knitting.  If WVU was playing and the game was not being televised, she would listen to it on the radio, while watching the other games on TV.

Although she enjoyed watching games with family and friends, it was understood that the focus was to be on the game. Talk of other things had to wait until commercial breaks or halftime.  When the team she was rooting for called for a play that did not work, and that she disagreed with, she would exclaim, “Those dumb bunnies!” … not the words anyone else was thinking of using, but we knew that she was upset. Once her advanced age prevented her from participating in many social activities, she expanded her interest in sports by following college basketball on TV, particularly WVU, and watching Ninja Warriors.

Rosemary loved being with family and friends, and she especially enjoyed visits and telephone calls from her grandchildren.  She followed their lives, knew what each was accomplishing, and was eager to share the news with everyone.  Her last words to her children and grandchildren who were at her side were, ”I have had a good life. Thank you.”

In addition to her parents and her husband, Rosemary was preceded in death by her sister, Elizabeth G. Yaeger, and an infant brother.

Friends will be received on Friday, March 16, 2018 from 5-8 p.m. at the Altmeyer Funeral Home, Elm Grove Chapel, 154 Kruger Street, Wheeling, with a vigil service at 7:30. Mass of Christian Burial will be celebrated on Saturday, March 17 at 10:30 a.m. at St. Michael Church, Wheeling with Msgr. Joseph Peterson as celebrant. Interment in Mt. Calvary Cemetery, Wheeling.

In lieu of flowers, the family requests that donations be sent to St. Michael Grade School, Attn: Library Fund, 1221 National Road, Wheeling, W.Va.  26003 or through www.tmcfunding.com

Dear Mike & Katheryn & Family, So very sorry for your loss. Our thoughts and prayers are with you and your family. Cheryl Wonderly

Dear Michael and Judy, and the rest of your family, I am so sorry about your loss. I remember your mom from so many years ago when we were neighbors. God bless you all.

To Michael and Kathryn, Judy, Susan,and the extended Kelly and Gompers Families: I was catching up on newspapers this morning when I read this news. Please accept my sympathies on the loss of your mother. The loss of the second parent has a finality understood only by those who have experienced that moment. My thoughts and prayers are with you at this time. – Ann

Our thoughts and prayers are with the Kelly family in the loss of your loved one. May the memories you hold in your heart bring comfort to you. May your faith bring you peace. With our deepest sympathy.

Michael and Family, All my heart and Prayers are with you. Sorry for your loss!

I have many fond memories of being with the Kelly family in Elm Grove over New Years and am so sorry to hear of her passing. Much love to the whole family.

I am so sorry for your loss, but please keep in mind that the bible says there will be a resurrection. Acts 24 : 15. Do you long to experience the joy of having a dead love one come to life again? God’s word the bible gives us that wonderful hope namely, the prospect of living in a paradise on earth and seeing the resurrection of our dead loved ones. Luke 23 : 43. The bible calls Jehovah God the creator of life and the source of life. Acts 17 :24, 25. Therefore, the One who gave life to all living creatures is certainly capable of restoring life to someone who has died. And in the future death will be no more. Revelations 21 : 3, 4. I hope this spiritual message will give you some comfort in your time of sadness. Please visit jw.org.

Rosemary was a faithful and devoted alumna of Mount de Chantal. I loved her obituary! What precious memories her family and friends have of a very special lady, and so do I!

To all the Kellys and Gompers: Rosemary stands out in my memory (going back 54 years!) for being kind and graceful and a Mom I know you could count on. I share your loss. You have my sympathy. She’s in good hands now.

Our sincere condolence to Sue Harmon and the entire Kelly family. She kept a busy and wonderful life. Our daughter Katie often spoke of her with such regard.