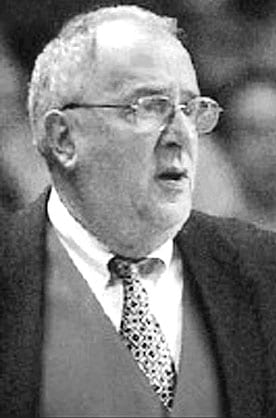 SAMUEL JOHN “COACH” ANDY, 76, of Wheeling, West Virginia, died July 30, 2016, at Liza’s Place, Wheeling, with his wife, Sandra Jean “Sandy” (Arnett) Andy, family, and several loved ones at his side.  Born June 25, 1940, in Wheeling, West Virginia, Sam was the son of the late Samuel John Andy, Sr., and Elaine Marie (Harmison) Andy McNabb.  His stepfather, Kenneth Edward McNabb, also preceded Sam in death.  Sam was a member of the 1958 graduating class at Wheeling High School and subsequently received his B.A. degree in education from West Liberty State College in 1963.  Sam was a lifelong educator whose teaching career began at Frazeysburg High School (Ohio) (1964 – 1966); and Tri-Valley High School (Ohio) (1966 – 1969); then continuing at Wheeling High School (West Virginia) (1969 – 1976); and Wheeling Park High School (West Virginia) (1976-2004).  Sam retired from his career as an educator in 2004. Coach Andy’s legendary career as a basketball coach also began at Frazeysburg High School (Ohio) in 1964 at which time he served as head coach of the boys’ basketball team until 1966.  In 1966, Coach Andy became the assistant coach of the boys’ basketball team for the consolidation school known as Tri-Valley High School (Ohio) until 1969.  Coach then continued his career as head coach of the boys’ basketball team at Wheeling High School (West Virginia) from 1969 to 1976.  In 1976, the last year before the consolidation of schools in Ohio County, Coach Andy won the 1976 AAA State Championship.  Later that same year, Coach Andy was selected from a group of candidates for the position of head coach at the newly formed Wheeling Park High School (West Virginia) where he remained from 1976 until his retirement in 2006.  Under the coaching regime of Coach Andy, the Wheeling Park Patriots went on to win State Titles in 1980 and 1995.  The 1995 State Championship win versus Beckley Woodrow Wilson is considered the best game ever played in State Tournament history.  The Wheeling Park Patriots won the 1995 State Championship 99-96 in triple overtime.  Coach Andy’s Patriots also finished as State Runner-Up in 1997 with State Semi-Final appearances in 1980, 1988, 1990, 1995, 1997, 1998, and 2000.  Coach Andy completed his coaching career with a record of 591-290 in Ohio County (West Virginia) and a record of 611-310 overall.  With 611 victories spanning a 39-year coaching career, Coach Andy was the second-winningest big-school boys’ basketball coach in state history.  He took teams to the West Virginia State Tournament 21 times in 37 years, with 17 at Wheeling Park in his 30-year tenure.  Coach’s teams finished the regular season ranked #1 in the state three (3) times (1977, 1995, and 1998); three (3) OVAC Championships (1977, 1998, and 2000); and was the 1995 OVAC Coach of the Year.   Coach Andy also won numerous other coaching honors during his illustrious career and had the honor of coaching numerous young men who went on to receive Player of the Year, All-State, All OVAC, and All Valley Honors.  Coach Andy was noted for playing anyone, anywhere, at any time including many national opponents whose players went on to the NBA.  Coach Andy also took great pride in his 3-0 record when challenged by the Ohio County Board of Education after which he went on to serve as a Board Member (2008-2012).Sam is survived by his wife, Sandra Jean “Sandy” Andy of Wheeling; his sister, Darlene “Dolly” Gillingham of Moundsville; his brother Roger McNabb of Florida; his nephews John (Karen) Gillingham and Charles (Nikki) Gillingham; his great-nieces Audrey Gillingham, Kailey Gillingham, and Lainey Baker; and several cousins in Ohio, Pennsylvania, and West Virginia. Friends will be received for Coach Andy on Saturday, August 6, 2016 from 12:00 noon until time of service at 8:00 pm at Altmeyer Funeral Home, 1400 Eoff Street, Wheeling, West Virginia.  Interment will be held at the convenience of the family.  Memorial contributions/donation can be made to The Andy Legacy Foundation at www.TMCFunding.com (Click Here) or can be sent directly to P.O. Box 951, Wheeling, WV  26003.  Online condolences may be sent to the family at www.altmeyerfuneralhomes.com

I have been out of touch for a while with the happenings in Wheeling. It is with great sadness that I now see that Mr. Andy passed away. I remember watching Cool Hand Luke in his psychology class , and discussing all different types of facets from sports to current events. He was a true honest teacher and I owe my passion for learning new things to him. He will truly be missed.

You will be sadly missed, but never forgotten!

To the family & friends of Coach Sam Andy,
My thoughts & prayers are with each of you in your time of loss & sadness. May God heal your hearts & in time each of you will smile with great happy memories of him & replace the sadness you feel. Coach Andy was a great man. He will be missed.
Donna Jackson-Bennett Powhatan Point, Ohio

Our condolences and prayers to Mrs. Andy and family.
Erik, Sharon, EJ, Steve and Alex Schramm

What a coach! What a fantastic man!. Always a pleasure to play for him and I consider myself lucky to have been one of his players. Sandy, I am so sorry for your loss

We were so sorry to hear about Sam. Sending prayers for you, Sandy.

Sincere prayers go up for the family and all who loved him. Rest easy Coach…

Coach Andy was one of a kind. Always smiling and blessed with a heart of gold. He was much more than a teacher and coach. He touched and changed the lives of many, not only his ball players. My prayers go out to MRS. ANDY and the entire family. Rest easy Coach