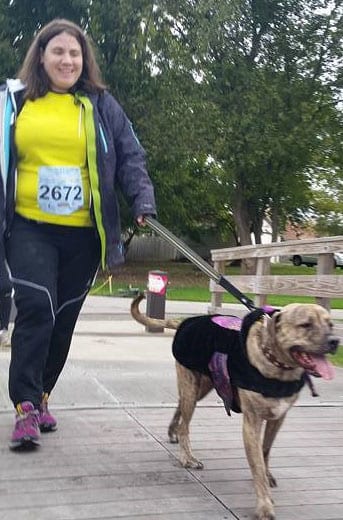 Shannon C. Palmer, 38, formerly of Wheeling, W. Va., passed away Thursday, November 5, 2015, at Summa Barberton Hospital, Barberton, Ohio.
She was born July 28, 1977, a daughter of Fred and Jean (Martin) Palmer. Shannon was a Catholic by faith. She graduated from Wheeling Park High School in 1995 and then went on to attend Mercyhurst College where she graduated in 2000 with a Bachelors in Athletic Training. Shannon was a good natured woman, who always gave to others. She was very active with sports and an advocate for dog rescues specializing in pit bulls.
Shannon is preceded in death by her paternal and maternal grandparents.
In addition to her parents, she is survived by her three siblings, Meagan (Lars) Kivig, of Denmark, Adam Palmer of Wheeling, and Bethany Palmer and her fiancée Jeff, of Homerville, Ohio; one nephew, Eno Kivig; several aunts, uncles, and cousins; four cats and her dog, Chance.
Family and friends will be received from 2-4 & 6-8 pm Monday, November 9, 2015 at Altmeyer Funeral Home, 1400 Eoff Street, Wheeling, where services will be held Tuesday, November 10 at 11 am, with Monsignor Bakhos Chidiac officiating.
Memorial contributions may be made to Humane Society of United States, 2100 L Street, NW, Washington, DC 20037.
Online condolences may be offered to the family at www.altmeyer.com.

Dear Jean & Family, My deepest condolences on the loss of your daughter Shannon.

I am so sorry for your loss. My condolences to the Palmer family. I spent a lot of time on the ice with Shannon in our high school days. Although I haven’t seen any of the family in years, I remember you all fondly. You are in my prayers in this difficult time.

Jean & family, I am so very sorry for your loss. Thinking of you all.

I just heard, so very sorry to hear of Shannon’s passing. My deepest condolences to all of Shannon’s friends and family.

Freddie Jean and family
We are so very sorry for your loss.
God bless your family in this time of sorrow.

I worked with Shannon at Omnicare. She was such a kind co-worker, and I am sure that her gentle and loving soul will be missed from this world. You have my most sincere condolences.

So very sorry to hear of your loss.
Fred, Jean and family, my heart is with you.

I just heard the news and I’m so sad to find this out. I remember playing soccer with Shannon growing up. Then seeing her at CVS here and there in college. My thoughts and prayers to her family.

Will never forget playing hockey with Shannon. A lot of good memories. My heart goes out to her family.