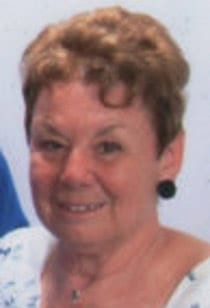 JOHNSON, Sharon L. (Gruber), 70 of Perry Township, Ohio, originally from Wheeling Island, passed away at her home with her family at her side.
She attended Blessed Trinity Elementary School where she was a cheerleader and graduated from Wheeling Central Catholic High School. She went on to marry Jim Johnson on September 6, 1969. They moved to Seattle, WA where they started their family, having two daughters. The family moved to Des Moines, IA in 1978 and while there she would make rosaries that would be shipped to missions all over the world. In 1985 the family moved to the Canton/Massillon area where Sharon spent many hours working on the bereavement meal team at St. Joan of Arc Catholic Church.
Through the years, Sharon was in exercise groups at the Hall of Fame Fitness Center and Aultman West. She was known as the sit up queen for her ability to do more sit ups than other group members.
She was very proud of her two daughters, Angelee and Mary as well as her grandson Dakoda.
She and her husband traveled all over the USA taking their tandem bike with them, especially to the Gulfport Mississippi area and Orlando/Clearwater, where her daughter Mary lives.
They were known for leaving home for one destination and changing their minds mid trip and ending at a totally different area. They found that being together was more important than the destination.
She is survived by her husband of 49 years, Jim Johnson, their daughters, Angelee (Shawn) Anderegg and Mary (Ben Rose) Johnson, their grandson Dakoda Anderegg. Also surviving are her siblings, George (Tammy) Gruber, Geary Gruber, Kim (Sharleen) Gruber, Scott (Beth) Gruber, Lee (Lisa) Gruber and Tambi (Rodney) Wilson.
She was preceded in death by her parents, George and Gloria (Riley) Gruber.
The family would like to extend a special thank you to Nancy Johnson for the special care she gave to Sharon and her family during their time of need.
Friends will be received on Monday, September 24, 2018 from 2-4 & 6-8 pm at the Altmeyer Funeral Home, 1400 Eoff Street, Wheeling, where a vigil service will be held at 7 pm. Mass of Christian Burial will be celebrated on Tuesday, September 25, 2018 at 10 am at the Cathedral of St. Joseph with Msgr. Kevin M. Quirk, J.C.D. as celebrant. Interment will follow in Greenwood Cemetery, Wheeling.
Online condolences may be expressed to the family at www.altmeyerfuneralhomes.com

Many Fond Memories of Sharon and the Gruber Family! Wonderful Lady ! You are all in our Thoughts and Prayers! Love to All !!

I am very sorry for the recent loss of your dear loved one, Mrs. Sharon Johnson. I have a brief encouraging message I would like to share with you from the Bible. The Bible can be a great source of both comfort and hope during this most difficult time in your lives. For an example, at Revelation 21:3-5 it assures us that the day is soon coming when our most loving Heavenly Father is going to wipe away the tears of sorrow from our eyes and that even pain and death will be no more. I hope after reading this it will be of some comfort to each one of you. If later you would like to learn more from the Bible about why we die or why does a loving God allow so much suffering and injustice, please feel free to go to the website: http://www.jw.org to find satisfying answers.

Condolences to you and your husband, Tammy.

Bill and Judy Seabright and Family

Our deepest sympathy to the Gruber family.

Sharon will be greatly missed, especially at all of the family reunions, but, my, what a reunion she’s having right now! The whole family is in our thoughts and prayers. You can have Gods peace in knowing that one day, we will all be reunited again, and this time it will be forever. God Bless.

My sincere and deepest condolences to the family and friends of Sharon. Denny Albaugh