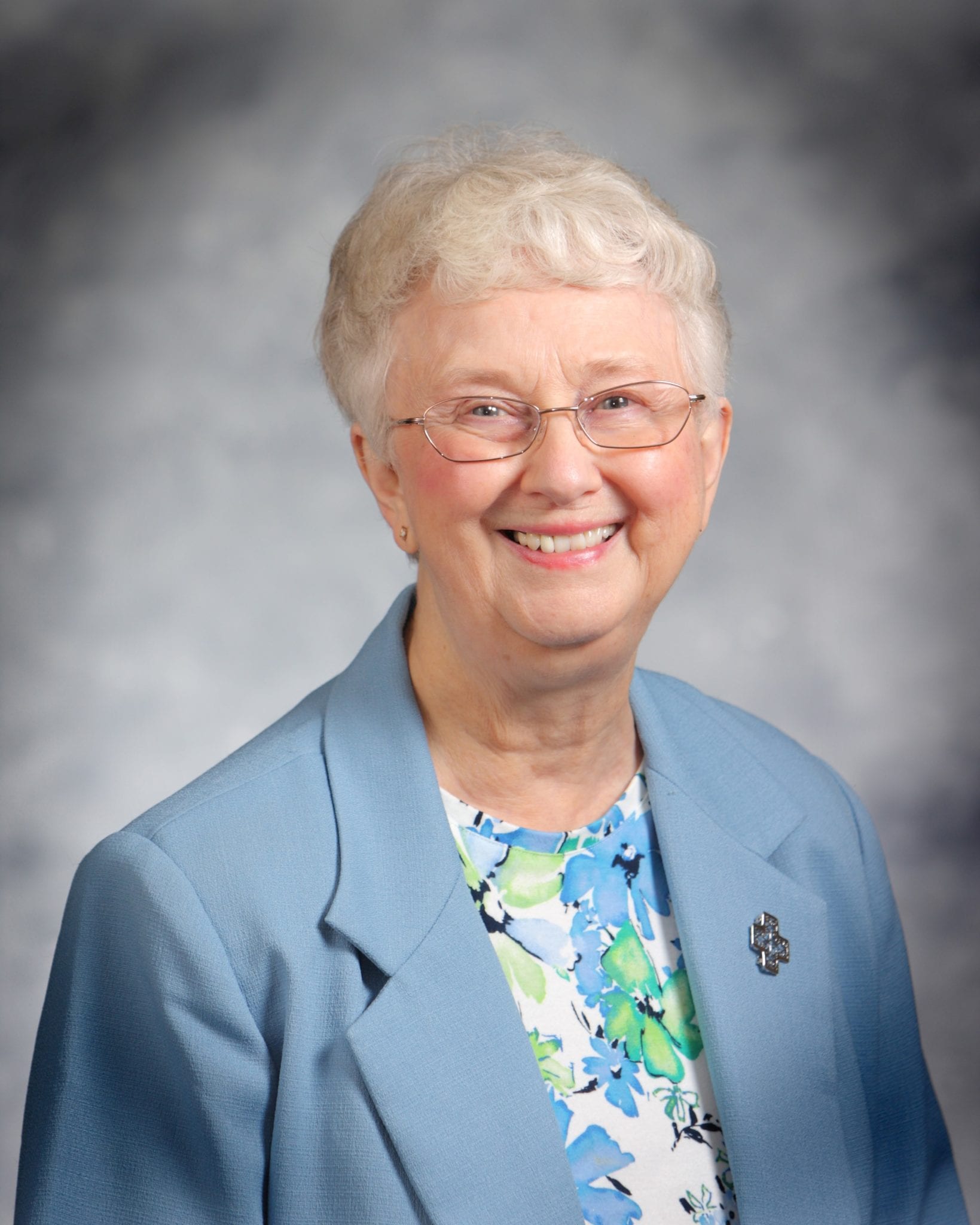 Sister Ann Hoye, daughter of the late Ralph D. and Dorothea Goff Hoye, died at Mount St. Joseph on Saturday, March 11, 2017. She was born in Columbus, Ohio, on October 18, 1932, and attended Holy Family Grade and High Schools in Columbus.   She entered the Congregation of St. Joseph in Wheeling on February 2, 1950.  She was first known in community as Sister Macrina.

Sister Ann recently shared this story of her life. “Even as a toddler, I felt attracted by color, texture, and the feel of water that penetrated much further than skin-deep.  I delighted in simple gifts that set our yard apart:  the small maple tree, the grape arbor, the lovely array of perennials that bordered our small parcel of the neighborhood.  Inside our simple abode, there were no carpets, but color and texture abounded.  Nearly everything was homemade, comfortable, and pleasing to the eye.  I soon discovered lovely patterns in our dozens of hand-hooked rugs, in simple window coverings, and in exciting switches of furniture slipcovers as the seasons changed.  I learned early on that it was possible to make something useful from scraps. It was such great fun for an inquisitive child growing up in an extended family!

“I cannot remember being taught art as a child. The most we ever did was to color pictures that were handed out.  My third grade teacher convinced me that I needed to use my voice a little more and soon had me singing for the entire school.  That initiated a new adventure when I began to invest half my small allowance in voice lessons from Sister Mary Alberta, RSM, whom I dearly loved.

“Over the next ten years, I sang myself straight into God’s wide-open heart. It was not until I entered our House and Family of Joseph, that Sister Rose McBreen taught us lettering and art appreciation; and that Sister Mary Grace Freeman pushed me to lend my hand at decorating blackboards, repainting weather-worn statues, creating gift cards of all sorts, telling my vocation story for the senior Academy Girls, writing a poem for Bishop McDonnell’s Feastday.  By the time for my first profession of vows, I was sure of the life to which God had called me.  Sister Mary Grace had already instilled in me a deep love of scripture and the history of our Congregation.  Sister Mary Immaculate Spires had fanned the flames of my musical abilities and ignited a deeper appreciation of fine poetry.  And God saw that it was all so very good!

“After sixteen summers at Duquesne, I earned a degree in education with majors in English and History. During Vatican II, Mother Mary Ruth Owen suggested that I participate in the Chicago Biblical Institute where I was exposed to the most prominent scholars of the time.  In the late 1960s, I began a Master of Arts Interdisciplinary Program at Manhattanville College of the Sacred Heart.  There I studied psychology, philosophy, theology, world religions, and world literature to prepare for service as a director of novices.  Then, thirty years later, I was appointed to that position.

“During a ten-month sabbatical in 1990, I earned a Master’s Certificate in Culture and Creation Centered Spirituality from Holy Names University in Oakland, California. While finally serving as Novice Director, I was encouraged to pursue certification in spiritual direction from the Haden Institute in North Carolina.  What a wonderful follow-up that was to the works of art that I had already expressed through my ministries of teaching, writing, pastoral care, health care, and leadership.”

Over these many decades, Sister Ann engaged in a variety of ministries: as teacher and principal in parochial schools of Clarksburg, Fairmont, Moundsville, St. Albans, and Wheeling; as director of volunteer programs for the diocese and her congregation; with the pastoral care department of St. Francis Hospital, Charleston, and management team at St. Joseph’s Hospital, Parkersburg.  She also served within her congregation in formation and leadership positions.  Sister Ann took special delight in her two-year venture of research during which she prepared Seasons of Nature and Grace, a life story of the Sisters of St. Joseph in West Virginia from 1853 – 2003.

Sister Ann is survived by her sister, Marsha Keiter and her husband Lynn, of Tampa, Florida; and several cousins. Family and friends will be received from 1:00 to 9:00 p.m. on Monday, March 13, at Mount St. Joseph, 137 Mount St. Joseph Road, Wheeling, where Vigil Services will be held at 7:00 p.m.  Mass of Christian Burial will be celebrated at 11:00 a.m. on Tuesday, March 14, in the Mount St. Joseph Chapel with Rev. I. Hadi Sasmita, SJ, as celebrant.  Interment will be in the Sisters of St. Joseph section at Mount Calvary Cemetery, Wheeling.

I am so deeply sorry for your loss. Ann sounded like a truly loving person who will be deeply missed.

May fond memories of your dear loved one bring you comfort during this hard time in your life. Look back on all the good memories you were able to have and smile at the fact that you were able to share these.  My heart and sympathies go out to you and your family.

Proverbs 10:7 The memory of the righteous one is due for a blessing.”

Something that gives us great comfort is the Bible truth that death is not the dot or period at the end of a sentence, but rather the comma or pause because our dear loved ones will live again. We know that we will see our loved ones again because the beautiful promise recorded at Revelation 21:4 “And he will wipe out every tear from their eyes, and death will be no more, neither will mourning nor outcry nor pain be anymore.”  What a truly special day so close at hand to be able to embrace our loved ones again!