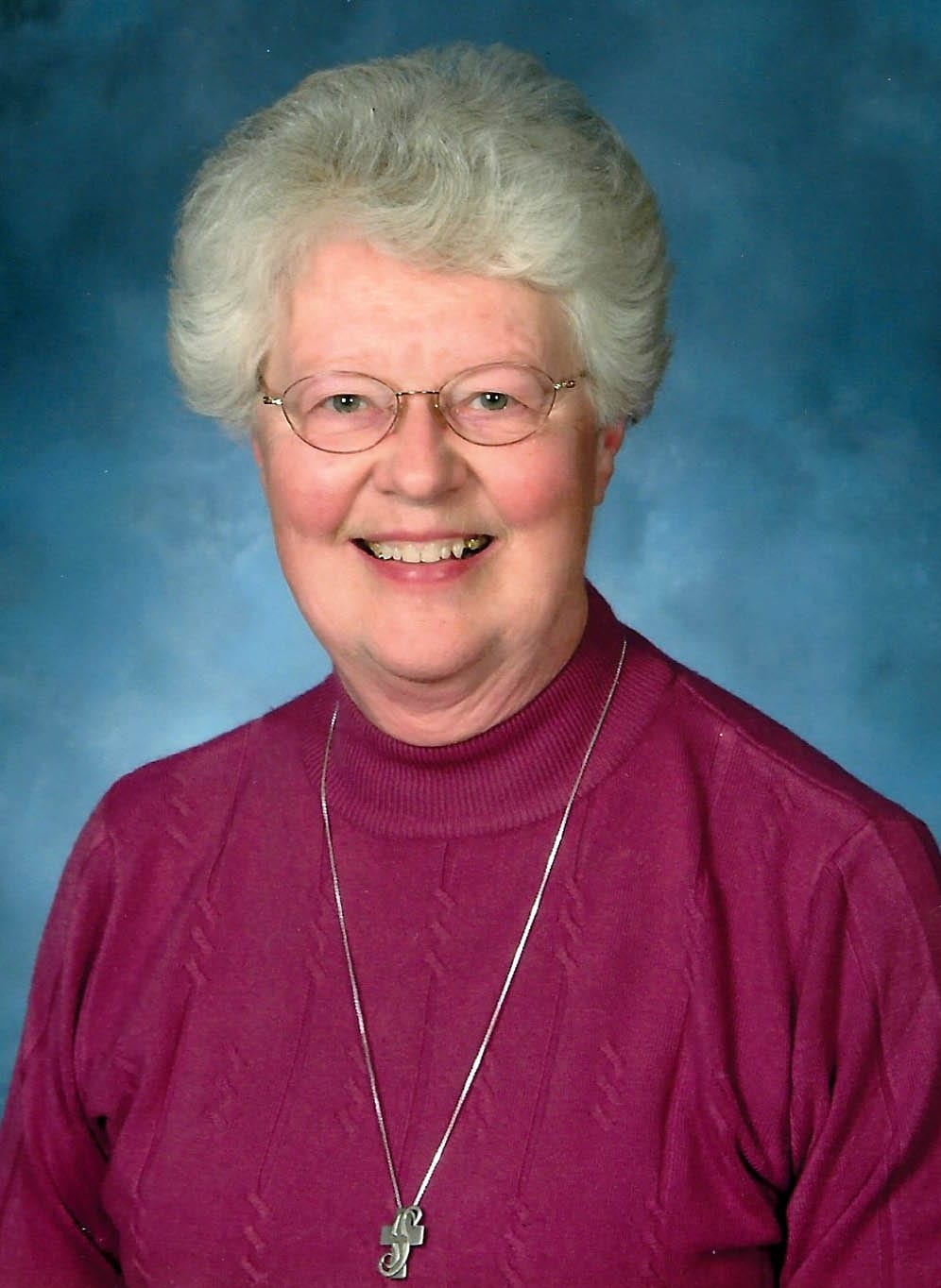 Sister Christine Riley, with two CSJ sisters at her bedside and her birth sister, Kathy, on FaceTime, died at Wheeling Hospital on January 13, 2021 following a three-week illness. Sr. Christine (Mary Alice) was born in Weston, West Virginia on December 7, 1936.  She was preceded in death by her father Lawrence Burke Riley, her mother Alice Edwards Riley and her older brother, Lawrence Burke Riley, Jr.  Her sister, Katherine (Kathy) Riley, lives in Weston.

After entering religious life, Sister Christine continued a nursing career and graduated from Wheeling Hospital School of Nursing, received a bachelor of science degree in nurs­ing at The Catholic University in Washington, D.C., and was conferred a mas­ter of arts degree in nursing administration from Columbia University in New York City.

For 16 years, she worked at Wheeling Hospital as a pediatric nurse and nursing service administrator.  “The children taught me about delight, simplicity, spontaneity, and how to live in a contemplative stance of being present to the moment,” she said.  Later, Sr. Christine was certified as a Catholic chaplain.

In 1987, she felt God’s call to companion others on their spiritual journeys.  In 1989, she completed the graduate program in Christian spiritual guidance at Shalem Institute in Washington, D.C., and con­tinued to offer spiritual direction throughout her life.  “I stand in awe and wonder at the varied ways God speaks to and through us,” she said.

Her journey as a Sister of St. Joseph led her into elected leadership in her congrega­tion where she served several terms on the council followed by 15 years of full-time congregational ministry as vice president and president of the Sisters of St. Joseph of Wheeling.

Sister Christine’s ministry took an unexpected twist when she felt God’s surprising Spirit drawing her into a more holistic approach to health and healing as a massage thera­pist. She was employed as a licensed massage therapist at the Howard Long Wellness Center in Wheeling for 13 years and offered therapeutic massage at various retreat centers.

Christine felt comfortable and at home anywhere and everywhere.  For the past 15+ years she embraced living in the 15th street neighborhood of Wheeling and enjoyed sharing the fruits of her backyard garden (especially green tomatoes for frying) with her neighbors!

Christine delighted in Creation, and especially relished summer trips to the ocean, which she made with numerous sisters, family and friends.

Christine loved music and could often be heard humming in the halls wherever she went.  She was a part of the Singing Sisters in her early days as a Sister of St. Joseph, and both toured with them and was a part of the album they created.  She joyfully attended concerts in the park and at the waterfront in Wheeling. She offered her gifts in music ministry at Mount St. Joseph. At the end of her life, she went to meet her Lord with the strains of “Ava Maria” and “Gentle Woman” playing in the background.

Christine loved events, especially galas and anything that drew in friends of the sisters of St. Joseph.  She particularly loved being one of the hostesses at the Spaghetti Dinner every November. We will never forget seeing her, arm around one person and the other hand warmly resting on another, laughing, welcoming and sharing stories with all who visited the Mount that day!

Christine loved to laugh.  She was a joyful person who loved a good story and would often linger at the table after dinner, sharing stories with whomever was present.  Christine helped us all to take ourselves less seriously and to generously forgive ourselves and others.  Laughing with her lightened our hearts and helped us to grow in appreciation of ourselves and others, and the delightful way life, sooner or later, worked itself out.

Sister Christine’s friends knew her to be a healing presence.  Whether connections were made with her in her capacities as a spiritual director, a massage therapist, or as a friend, her words and touch always brought comfort and a sense of wellness.  She accompanied both family and friends during their healthcare crises with comfort, encouragement and medical expertise.  Christine was fully present to everyone she met. Nobody left a visit with her without feeling seen, heard, special and loved.

In her final weeks in the hospital, Christine continued to reach out to friends through emails and texts.  She connected with and prayed for others who were having medical procedures or other life issues.  To the end, Christine was thinking of others, reaching out to offer her loving heart and prayerful support to all who might need it.

The most frequently-used tributes to Christine on social media since her death include this one: “She was a beautiful soul.”  She was, indeed.  May the freely-offered love of this beautiful soul continue to radiate among us.  May we continue to offer it to the world for the sake of the mission, just as she did.  And may her beautiful soul rest in peace.

A Memorial Mass will be celebrated at 4 pm, Saturday, November 5, 2022, at Mount Saint Joseph, 137 Mount St. Joseph Road, Wheeling, WV 26003.  Sister Christine’s Mass will be streamed live on this page, for those who may not be able to attend in person.

Memorial contributions may be made to the Congregation of St. Joseph, 137 Mount St. Joseph Road, Wheeling, WV 26003.

Sr. Christine was a singularly energetic person who reach simple solutions to complex problems and I recall her strengths in the time of changes at both St. Francis Hospital in Charleston and St. Joseph’s Hospital in Parkersburg and our trip to visit Bishop Schmidt during the interesting times. She was prepared for any and all events. A loving and beautiful soul.

“O God in heaven, hear our heart’s cry out for the loss of those who will never be mere numbers to us. They are our beloved mothers, fathers, sisters, brothers, grandmothers, grandfathers, aunts, uncles, husbands, wives, children, and extended family. They are beloved fellow Americans, suddenly wiped out by an Invisible enemy mightier than all the world’s armies. Merciful Lord, we ask you to bless all those now shouldering heavy burdens from so great a loss.” Rest In Peace Sister Christine.

Kathy, I was saddened to read of Sister Christine’s passing. She led an amazing and rewarding life of service. Although I only met her a few times, I felt that I some what knew her from listening to you talk about her .Please accept my condolences. Christine was certainly welcomed by many Riley’s as she crossed over.

I was so sad to hear of Sister Christine’s passing. My sister was in her nursing class at North Wheeling Hospital and then worked with her in Pediatrics. I recieved many mental and physical healing massages from Christine over her years at HLWC. She was an amazing person and I offer my condolences to her family. May God Bless You and give you Peace and Comfort in the days, weeks and months ahead.

RIP Sister Christine. I have fond memories of you as you hired me for my first nursing job as soon as I finished college on 3/12/1979. You worked tirelessly for many years after that. I remember seeing you visiting patients at Good Shepherd not long ago.

Gabriel Project of WV - Board, Staff and Volunteers

Kathy, we send deepest sympathy from all of us at the Gabriel Project of WV. Sister Christine loved us and we loved her. She was instrumental in the formation and expansion of our organization, caring deeply about the families we assisted and their babies. She served on our Board of Directors, as Board Secretary and on several committees. Even after leaving the Board, she continued to support the Gabriel Project and advocated for us, helping us gain vital funding and working with our Northern Programs Chapter. She was truly a wonderful, unique person, always with a smile on her face. She will be deeply missed by us and by all who knew her. Kathy, please let us know if there is anything we can do for you. May God bless you and comfort you.

I met Sister Christine when she was Head Nurse of Pediatrics in Wheeling Hospital. My daughter had a broken leg and was in the hospital for a month and I wouldn’t have survived without Sister Christine. I have also been the recipient of her wonderful massages. She was truly outstanding and will be greatly missed. God bless.

Condolences to Christines fellow CSJ members.
Meeting her wherever was always special.
RIP Sr. Christine, you will be remembered in our prayers.

Sister Christine always had a warm welcome and a beautiful smile to greet you, a pleasantness that you never forgot. Rest In Peace Sister Christine, you are loved!

Always had a warm welcome and a beautiful smile to share. Rest In Peace Sister Christine you will be missed by many but we will see you again!