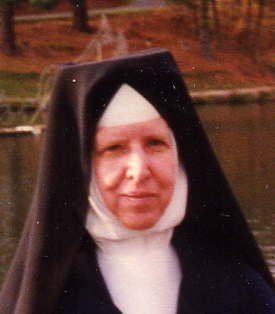 Sister Mary Clare received an AB degree from Duquesne University, Pittsburgh, Pennsylvania.  She worked in the Medical Records Department at Wheeling Hospital for twenty years between 1955 and 1981, including several years as the Director of the department.  She was Secretary for the Wheeling congregation from 1982 to 1985, was Assistant to the Treasurer from 1985 to 1989, and served as Pastoral Minister to the sick/infirm sisters at Mount St. Joseph from 1989 to 1999.  She was a member of the General Council from 1976 to 1982 and also served on several congregational boards and committees.  As she celebrated her 60th Jubilee in 2013, she shared that “she enjoyed being a Sister of St. Joseph for the last 60 years.”

In addition to her parents, Sister Mary Clare was preceded in death by her brothers Lawrence, James, and Patrick L. Smith and her sisters Amy and Anne Smith.  She is survived by many nieces, nephews, friends, and members of her community.