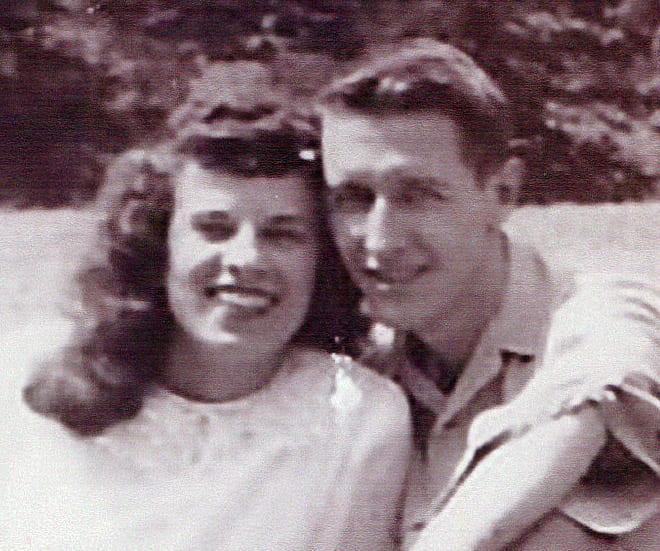 Together Again
Sophia Ann “Sophie” Gockstetter, 93, of Bethlehem, passed away Monday, July 23, 2018, at her home.
Sophie was born April 15, 1925, in Wheeling, a daughter of the late Teofil and Modesta (Rutkowski) Kozicki. She was a Catholic by faith; enjoyed traveling; and was a former member of the Women’s Club of Wheeling.
In addition to her parents, she was preceded in death by her husband, George Louis Gockstetter, in 2012; three brothers, Henry and Alexander Baranowski, and Daniel Kozicki; a sister, Helen Gorczyca; and a sister-in-law, Virginia Gockstetter.
Sophie is survived by her two children, Cindy (Reggie) Clark of Wheeling and Gary (Beverly) Gockstetter of Wheeling; three grandchildren, Carrie Taylor and her fiance’, Mike Sinatra, Megan (Nick) Gyorko and Chris (Amy) Gockstetter; two great-grandsons, August and Vincent Gockstetter; a step-granddaughter, Wendy Weimer; a step-great-granddaughter, Leah; a sister-in-law, Wanda Kozicki; and numerous nieces and nephews.
Friends will be received on Thursday, July 26, 2018, at the Altmeyer Funeral Home, Elm Grove Chapel, 154 Kruger Street, Wheeling, from 10 am until time of funeral services at 12 pm, with Deacon Doug Breiding officiating. Interment will follow in Greenwood Cemetery, Wheeling.
Memorial contributions may be made to the American Heart Association, 5455 N. High Street, Columbus, OH 43214, or online at www.TMCfunding.com. Online condolences may be offered to the family at www.altmeyerfuneralhomes.com.

To the family of Sophia Ann Gockstetter. nd gave Everlasting comfort and good hope by means of undeserved kindness, comfort your hearts and make you firm. 2 Thessalonians 2 :16,17

I’m sooo sorry for your loss. I’m praying for you all. ❤️

You have our deepest condolences. Sorry for your loss.

I am so sorry for the passing of Aunt Sophie. She will always have a special place in my heart forever. I have so many fond memories of her. God Speed Aunt Sophie.

im so sorry to hear about you mom Gary and Cindy….such a nice lady.if we can do anything please let us know