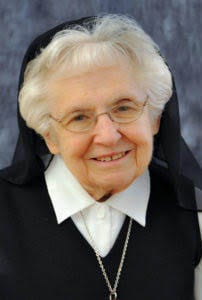 Sr. Mary Florence (Rosemary) Burke (93) died peacefully at Mount St. Joseph on March 19, 2021 in the company of her sisters. Her death was considered natural and came after a period of decline attributed to aging. She was born in Wheeling, WV on June 15, 1927. She was preceded in death by her parents, John J. and Agnes (Garrity) Burke, her brothers Wilbert and George Burke, her sisters Kathleen Arbogast and Margaret Reinbold and her nieces Virginia Susan Gallaway and Rosemary Robinson. She is survived by many nephews and nieces as well as grand-nephews and grand-nieces.
Sister Mary Florence Burke entered the Congregation of St. Joseph in Wheeling on September 8, 1945, having been taught by the Sisters of St. Joseph for twelve years. She served as teacher and principal in schools throughout the Diocese of Wheeling-Charleston including Williamson, Weston, Charleston, Clarksburg and Wheeling. She worked as the librarian at Central Catholic High School in Wheeling for many years and was an active member of Cathedral parish. Sr. Mary Florence loved her students and the faculty, staff and parishioners with whom she served. She was a member of the Sisters of St. Joseph Auxiliary, the Wheeling Hospital Auxiliary, CCHS/SJA Alumnae Association, CCHS School Advisory Council, and the National Catholic Educational Association. In 2020, Sr. Mary Florence celebrated 75 years as a Sister of St. Joseph.
Throughout her years of consecrated life, she says the joy of living in the house of the Lord, participating in daily Mass and receiving the Holy Eucharist, the rosary, prayers, and other devotions have been a blessing. In Sr. Mary Florence’s own words, “Life has been replete with its unforgettable joys and tragedy. I have played a role in the lives of children for nearly seventy years, and I treasure the memories, the pictures, and the daily tidbits (thanks to modern technology) that keep me in touch with their lives and those of their offspring. My teaching career has enabled me to appreciate the diversity of religious beliefs and international cultures. “
Sr. Mary Florence was known for her quick smile and bright eyes. She had a great devotion to Our Lady and to St. Joseph, her patron. She was connected to family and friends with bonds of deep love. Even at age ninety-three Sr. Mary Florence was able to serve her local CSJ community through prayer and action. She stayed in touch with many alumnae of Central Catholic High School. She lived a full life and at the end of her life told sisters and staff that she was ready to meet her Lord.
Sr. Mary Florence’s funeral liturgy will be held at Cathedral Parish in Wheeling on March 24th at 10 am. Visitation will occur at the Cathedral from 9-10 am prior to the funeral. The funeral liturgy will be livestreamed via Tribu-Cast (click here).  Graveside services will follow at Mt. Calvary cemetery. Following Covid safety guidelines, family and friends are invited to attend. Arrangements are provided by Altmeyer Funeral Home, Wheeling.

Sr. Mary Florence remembered the day my mother died forty years before when I was in her second grade class. I was astonished since I hadn’t seen her in that time. Thereafter I would visit her whenever I got back to Wheeling. It was always a joy to see her. To the end she wore the habit of the sisters of St. Joseph and died on the very feast day of St. Joseph, surely a sign of God’s favor. I will miss her.

I knew Sister Mary Florence best as my “Aunt Rosemary”. One of my fondest memories is of the doll she gave me as a child, dressed in the 1950s habit of the Sisters of Saint Joseph. It was exquisitely crafted from her blessed hands. Such a loving soul, she kept in contact with me all these years. I just received a note from her in January and did not know of her passing until my Mom (her late brother George’s widow) found out about it from a friend this week. Rest in peace, Aunt Rosemary

God Bless you dear friend. You will be missed but you have entered Eternal Life greeted by Almighty God and all your family and friends. Thanks for being such an important part of our family. We love you so much.

This beautiful soul has entered the Gates of Heaven and is Praising The Lord with all the Angels and Saints!
We were also members of The Righteous Martha’s together. How much I enjoyed hearing Sister leading The Joyful Mysteries after each Saturday morning Mass.
How humbling it was for me to have her call to ask me to come up to the convent and drive her down to church; and how privileged I was to had been part of her DRIVE AROUND PARADE( during a Pandemic) to celebrate her 75 Years in Religious Life!
As I began writing my Easter cards, Sisters was already written and sealed, when I received the word of her passing.
Rest In Peace, Sister Mary Florence. You will always be in my heart!!!!

Sister Mary Florence was a saint on earth, and now she is a new saint in heaven. She was like a member of our family, and we Vigliettas all love her so much. She brought so much joy and love and humor into our lives, and although I will miss her, I like to think she entered heaven with a big, happy hug from my dad, who was like a son to her. I hope they’re sharing some Uncle Pete’s turkey and gravy right now. We love you, Sister, and appreciate your selfless devotion to God, the Church, the city of Wheeling, and the noble work of education and literacy.

I will always remember her kindness, her ready smile. She was strong, but she loved so much. I am so glad we were able to see her this summer, if only briefly.

Her smile, that little twinkle in her eyes, and the love she had for our Lord was a blessing to us all. Rest In Peace!

Her smile, that little twinkle in her eyes and her love for the Lord was a blessing to all of us. Rest In Peace!

My sincere and humble condolences to the family and friends of Sr. Mary. I knew her and many of her relatives throughout my life. . I was always happy to see her as she was a gleaming ray of sunshine. Denny Albaugh