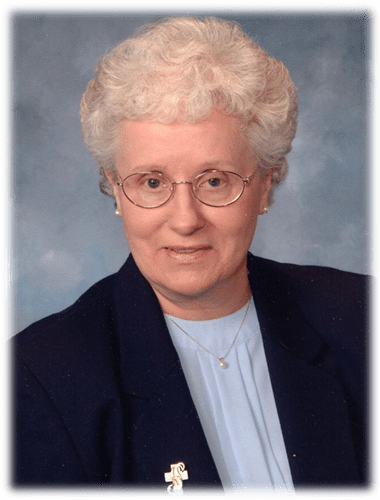 Sister Mona Farthing, a Sister of St. Joseph for nearly 66 years, died peacefully at Mount St. Joseph on July 23, 2021.  She was preceded in death by her father Charles, her mother, Mildred, and her sister Barbara Hauber.  She is survived by her beloved niece, Jessica Barret Grogg and her husband Shawn, her great-nephews, Devon and Adam, and her brother-in-law, Steve Hauber who live in Parkersburg, WV.

While in the nursing program at St. Francis Hospital in Charleston, Sr. Mona received the gift of faith and was baptized into the Catholic Church.  Responding to the support and example of the Sisters of St. Joseph serving at the hospital, she requested admission to the Congregation and entered on September 8, 1955.

After receiving her nursing degrees from The Catholic University of America, Sr. Mona served throughout West Virginia in all levels of nursing practice at St. Francis Hospital in Charleston, Wheeling Hospital, United Hospital Center in Clarksburg and The Louis A. Johnson Veterans Medical Center in Clarksburg.  In addition, her teaching career in nursing spanned 23 years at West Virginia Wesleyan College in Buckhannon and at Wheeling Jesuit University.  Her students remember her for the unique way in which she included practical suggestions along with nursing theory.

After retiring from Wheeling Jesuit University Department of Nursing in 1999, Sr. Mona continued to provide service to the sick as a part-time chaplain in the Pastoral Care Department of Wheeling Hospital.  She also served her Congregation of the Sisters of St. Joseph as a member of the formation team and in congregational leadership.

Family and friends will be received Wednesday, July 28, 2021 from 9 am until time of Mass of Christian burial at 10 am at St. Vincent de Paul Catholic Church with Fr. Jim Conroy, SJ officiating. Interment will be held at Mt. Calvary.

The funeral mass will be able to be viewed via Memory Share. The link will be available on Sr. Mona’s online obituary.

Please remember Sr. Mona, her family and community in your prayers.

Condolences may be offered at www.altmeyerfuneralhomes.com. Arrangements are in the care of Altmeyer Funeral Homes, 1400 Eoff St.

Sr Mona were colleagues and friends at West Virginia Wesleyan College. Such a delight to be in her presence.