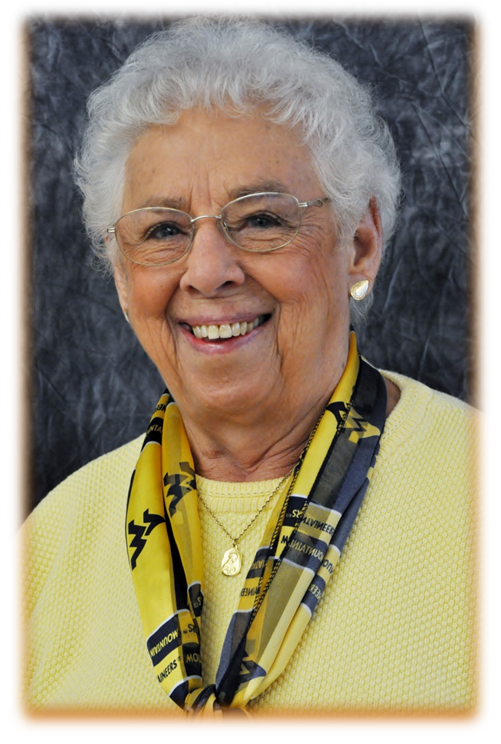 Sister of St. Joseph Rita Marie von Berg, who was the CEO and chairman of the board of the former St. Joseph’s Hospital in Parkersburg and the administrator at Wheeling Hospital in Wheeling, turned 100 years old on August 27, 2022.  Almost exactly 2 months later, on Tuesday, October 25, she went home to God.

Sister Rita Marie was born in South Wheeling to Peter Paul and Anastasia von Berg. She entered the Congregation of the Sisters of St. Joseph in 1939 and celebrated 81 years of religious life. “I’ve had a Love affair with the Sisters of St Joseph since I was in the first grade. From grade one through twelve, the sisters were in my life – my teachers, mentors, counselors. I wanted to be one of them and that’s what happened! I started my journey June 24, 1939; and after 80 years, I love them as much today as I did in the first grade.”

Sr. Rita Marie was a graduate of the Wheeling Hospital School of Nursing, received a bachelor of science in nursing from Catholic University at Washington, D.C., and a master’s in counseling and guidance from Ohio University in Athens.

Sister Rita Marie was chief executive officer from 1964 to 1976 at St Joseph’s Hospital in Parkersburg, then owned by the Sisters of St. Joseph. Under her leadership she began the Paramedic Ambulance Service, inviting young men and women to help shape the course for pre-hospital care and paramedicine in West Virginia. She was the chairman of the Board of Directors from 1976 to 1991 at St. Joe’s and was on the Sisters of St. Joseph Leadership Team from 1989 to 1993.

She resided in Torch, Ohio with dear friends Asunta Damron and Sharon Feeney, who she referred to as her “mates,” and contributed her talents to St. Ambrose Catholic Church and the Mid-Ohio Valley. Sister Rita Marie was proud of her involvement with the Red Cross Disaster Nursing, providing care to victims from Hurricane Andrew and floods in the Albright, WV area.

An animal enthusiast, she raised nubian goats that provided milk to many families with children who required a special diet and milk. At the time of her death she had three dogs, two cats and two fish that kept her active and amused with their antics.

She was active in the Clown Club and delighted in raising the spirits of children and the sick as Whugy the Clown.

Sister Rita Marie also was an enthusiastic and avid West Virginia sports and WVU football fan who had attended many football games, both at home and away. Opposing fans considered her loud and boisterous, which made her very proud.

Well into her late 70s, Sister Rita played basketball in the West Virginia Senior Women’s League. Her team won and was presented with the championship trophy, although she confessed to folks that the other team did not show up.

She was considered a fine shot in both trap and target shooting and among her lifelong interests were outdoor sports, camping, wildlife photography and white water rafting on the New River. Her favorite motto was “Live, love, laugh.”

“I believe in my heart that I lived life to the fullest.  I love God and all He has created with a passion, and I laugh a lot,” Sister Marie said. “In whatever years I have left, with God’s help, they will be lived in the spirit of gentleness, peace, and joy.”

Rita is survived by the sisters and associates of the Congregation of St. Joseph, a niece, friends Asunta Damron and Sharon Feeney, and a multitude of friends across West Virginia and beyond, both four-legged, winged and two legged.

An important part of Rita Marie’s final wishes was donating her body to WVU School of Medicine. Once her cremains have been returned to the Sisters, her funeral liturgy and interment will be scheduled to celebrate her life.

Sister Rita was a joy, she had a heart as big as a house and a great laugh. I knew her in the years of “My favorite things”
I worked in the beauty shop next door and would often spend time there in between appointments, buying coffee and chit chatting with the sisters.
She would often talk about her goats❤️ She even came to my Bachelorette party…she truly will be missed. Thinking of Asunta
especially…my heart goes out to all who lives she touched.

My heart is greatly saddened by the news of Sister Rita Marie’s passing; yet I rejoice in the knowledge that she is with our Lord Jesus, and she is also in the company of many saints who have gone before her.

May God’s peace and blessings be yours during this most tender season; and may He give you many lovely memories, so that you may always have roses in December.

I remember Sister Rita Marie coming into My Favorite Things. She was a wonderful person. My prayers are with Asunta.

Deepest condolences to the family and friends of Sr. Rita Marie.

I have such amazing fond memories of spending time at the farm with all the animals when I was young. I have told so many people how amazing the weekends I spent there with ausunta, sister Rita Marie, sister Mary Carney, we went to church with them if we stayed that long. When I became very very ill at age 18 they loaned my father and step mother a camper so they could stay near me while I was in Cleveland clinic. Such amazing people I am such a better person having known these wonderful cherished children of GOD. Hope you are enjoying Heaven my dear. Nanette Hess Cross RN

So sad to hear of Sister Rita’s passing. Always loved being around her because she would always put a smile on my face. I was at her 90th birthday party. My condolences to Asunta and Sharon and her many, many friends❤️ 🙏

My sincere and humble condolences to the family and friends of Sister Rita Marie. Denny Albaugh

Rita was an angel in my family’s life. True to her motto, she enriched us with her life, love and laughter!

Very sorry to hear of the passing of Sr. Rita Marie von Berg. She was a remarkable person. Rest in peace.