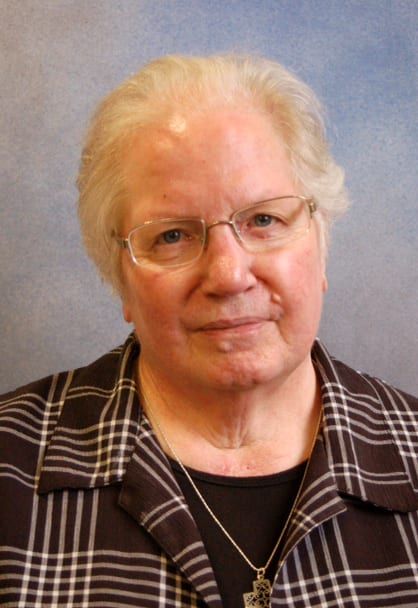 Sister Veronica Baumgartner CSJ
Sister Veronica Baumgartner, CSJ, 76, a member of the Congregation of St. Joseph, entered
into eternal life on Wednesday, June 24, 2015, at Mount St. Joseph, Wheeling, West Virginia.
Sister Veronica (Elizabeth Josephine) was born on January 28, 1939, to Charles and Mary
(Taylor) Baumgartner of South Bend, Indiana.
She attended grade school in St. Matthew Parish in South Bend, Indiana, and graduated from
St. Joseph Academy in Tipton, Indiana. She joined the Congregation of St. Joseph and was
given the name Sister M. Veronica. She made first vows August 15, 1958, and final vows on
August 15, 1961. Sister Veronica earned a B.A. Degree in Elementary Education from Mount St.
Joseph College in Cincinnati, Ohio, and a M.S. Degree in Elementary Education from Indiana
University.
Sister Veronica’s first mission was St. Paul School in Marion, Indiana. Her teaching career
spanned the years of 19591983
in Catholic Schools in Indiana, at times serving as principal.
She was a competent and dedicated teacher and a capable organizer. In 1983, she was granted
a muchdeserved
Sabbatical in Arnprior, Canada, which for her was a very enriching experience.
When she returned from her sabbatical, Sister Veronica worked for the Bishop of Lafayette,
Indiana, assessing the quality of Religious Education in the Diocese. In 1984 she was
appointed Director of Religious Education. In 1986, she was elected to leadership in the Tipton
Community and served as President for two terms until 1994.
In 1995, Sister Veronica, with the support of her community, founded Caregiver Companion in
Lafayette, Indiana, a ministry which provides practical assistance to caregivers and to the
people for whom they cared. She was able to find many volunteers to work in this ministry and
was able to raise the funds necessary for it to continue. Her vision of showing God’s
compassion and love to the sick and the family members who cared for them was realized in
this outreach ministry.
In 2002, she was again called to leadership in the Tipton Community. She served as a
member of the Leadership Team and, at the same time, opened a branch office of Caregiver
Companion in Tipton and continued to direct this ministry. In recognition of her work with
Caregiver Companion, she was chosen as the “Hero of the Year” for Tipton County. Sister
Veronica was very instrumental in the founding of the new “Congregation of St. Joseph” which
was created by the union of seven St. Joseph Congregations.
In 2007, Sister Veronica had a serious illness and was required to discontinue the work she
had been doing with Caregiver Companion. Seasoned employees, however, were well
qualified to assume the leadership role. Sister Veronica took on the job of writing and
procuring grants, which she did until she moved to Wheeling, West Virginia, when the Tipton
Center closed in 2012.
Sister Veronica was welcomed to the Wheeling Center where she served as parttime
receptionist, made greeting cards for the sisters, gave tips to sisters on how to use a computer
or Kindle, helped sisters order items online,
was a lector, played cards with a group of sisters,
prayed for many people – especially during her long illness (she offered her sufferings as her
prayer for others). She was a board member for the Sisters Health Fund (formerly the SSJ
Charitable Fund) in Parkersburg, West. Virginia. She brought much joy to our center by her
presence and her beautiful smile, as well as her wonderful way of being grateful to God for all
that she was given.
In addition to her parents, Sister Veronica was preceded in death by two brothers: Frederick and
John; and two sisters: Mary Kathryn Skibbe and June Brafman. She is survived by three
brothers: Charles and his wife Elaine from South Bend, Indiana; James from Watseka, Illinois;
and Richard from Vandalia, Michigan; a brotherinlaw,
Lawrence Brafman from Peru, Illinois; a
sisterinlaw,
Janet Baumgartner from Grand Rapids, Michigan; many nieces, nephews, great
nieces and nephews; cousins; a good friend Yvonna Palmer of Vandalia, Michigan; friends; and
members of her community.
Family and friends will be received from 1:00 to 9:00 p.m. on Monday, June 29, at Mount St.
Joseph, 137 Mount St. Joseph Road, Wheeling, where Vigil Services will be held at 7:00 p.m.
Mass of Christian Burial will be celebrated at 10:30 a.m. on Tuesday, June 30, in the Mount St.
Joseph Chapel with Fr. William Rickle, SJ, as celebrant. Interment will be in the Sisters of St.
Joseph section at Mount Calvary Cemetery, Wheeling.
Memorial contributions may be made to the Congregation of St. Joseph Wheeling
Center, 137
Mount St. Joseph Road, Wheeling, WV 26003. Funeral arrangements by Altmeyer Funeral Home, Fourteenth and Eoff Streets, Wheeling.

Sr. Veronica was a wonderful, caring person. She will be greatly missed by all of us who worked at the Tipton St. Joseph Center. Prayers for her family.

My sincere condolences to the family,friends,and all of those who were touched by this wonderful person. Denny Albaugh