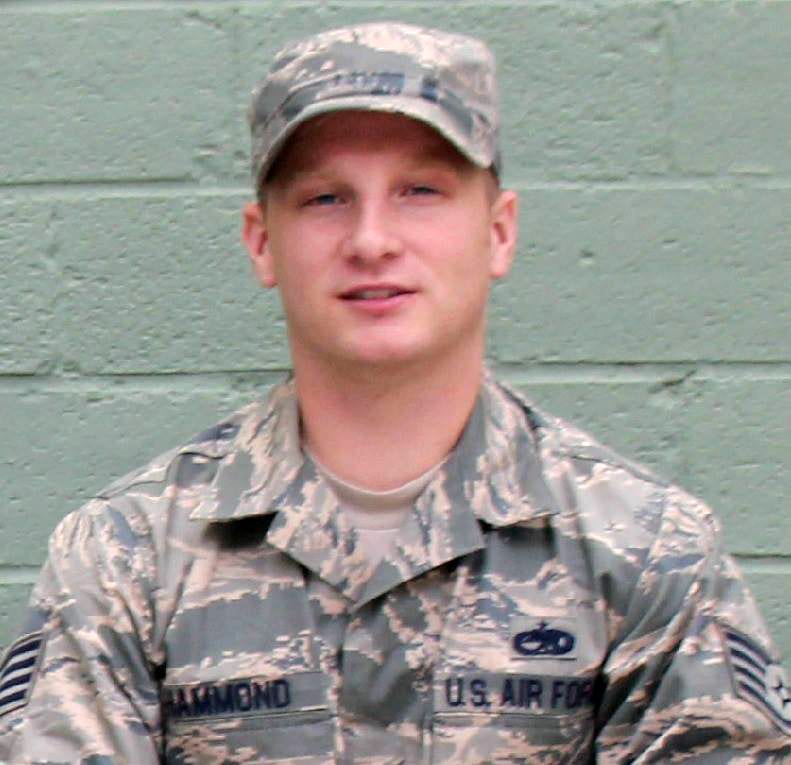 SSgt Ryan David Hammond, 26, of Moundsville, W.Va., left our world as a hero Friday, October 2, 2015. Ryan was killed in action when a U.S. C-130J plane crashed while taking off from Jalalabad International Airport in Afghanistan.

Ryan’s unique character is one that you can’t really describe except by stories told by those who loved him. He was a fearless adventurer, the life of the party and a selfless soul. Beloved by all, Ryan lived life to the fullest every single day. He lit up at every chance to ride his dirt bike on the riskiest jumps, climb rocks in the restricted area, hike the Grand Canyon and Appalachian Mountains and so much more. Ryan’s competitiveness met his talent in many sports and board games and led him to succeed in whatever he put his mind to. Ryan was effortlessly hilarious with his random shenanigans, from his weird skits and outrageous costumes to his all-around goofy energy.

In addition to his eagerly anticipated entertainment, Ryan went out of his way to help anyone and everyone by lending a shoulder or listening ear. He could always be counted on to take care of those he loved by simply being there and offering his wise-beyond-years advice. Ryan had a way of bringing family and friends together, and he continues to do so today with thousands of unforgettable hilarious memories. God’s purpose for Ryan was undoubtedly to create laughter.

Ryan was born on March 29, 1989, in Glen Dale, W.Va. After graduating from John Marshall High School in 2007, he proudly joined the United States Air Force in September 2007 as an F-15 Avionics Technician at Tyndall AFB, Fla., and Seymour Johnson AFB, N.C. After six years of service, Ryan cross-trained to a Loadmaster and arrived at Dyess AFB, Texas, in March 2014 as part of the 39th Airlift Squadron. He was a highly devoted airman who had a passion for flying. He was serving on his first deployment as a Loadmaster with his crew on TORQE 62.

Before his deployment, Ryan applied to officer training school. He was a member of the elite USAF Honor Guard. Ryan was also working toward his Bachelor’s degree in Technical Management at Embry-Riddle Aeronautical University. A Christian by faith, Ryan was a member of Ebenezer United Methodist Church on Roberts Ridge, in Moundsville. Ryan lived in Abilene, Texas, with his wife and their dog, Dug.

Ryan is survived by his wife Holly, 23, of two years after being married May 11, 2013, in Pensacola, Fla., near Holly’s hometown of Navarre. Ryan also leaves behind his parents David and Cathy (Berisford) Hammond and two sisters Jodee (Hammond) Juarez and Laura (Hammond) Hill; his maternal grandma Mildred (Lewis) Berisford; aunts, uncles, cousins and niece; countless friends; and pet dog. He is preceded in death by his maternal grandfather Conward Berisford, and paternal grandparents Norman and Dolores (Wallace) Hammond.

Ryan’s family will receive friends at a memorial gathering from 1-3 p.m. and 5-8 p.m. on Wednesday, October, 14, 2015, at the Altmeyer Funeral Home, Lutes & Kirby-Vance Chapel, 118 Grant Ave., Moundsville. Interment will follow at Arlington National Cemetery at a later date.

In lieu of flowers, the family suggests that memorial contributions be made to Friends of the Fallen, P.O. Box 2081, Dover AFB, DE 19902.

Let Ryan’s steadfast laughter encourage us all to live life to the fullest. “I can do all things through him who strengthens me.” Philippians 4:13 (ESV)

Hello. I do not know your family nor did I have the honor of knowing your fallen hero Staff Sgt. Hammond. I am a military brat that decided to honor a fallen hero every day…today I am reading and learning about your loved one. I just wanted you to know that his name and what he has done for our country is being shared on my FB page today. I am truly sorry for your loss. Peace ~ Suzanne

To the Family of Air Force Staff Sgt. Ryan D. Hammond, I learned of Ryan’s passing in the service of our country today in church. Please accept my deepest heartfelt condolences and gratitude for your son and his commitment to serving so that we can live knowing that we are protected by the bravest of heroes. I Thank Ryan and pray for his family and Friends.
Always indebted to Ryan and his family & Friends

I was so moved by reading Ryan’s obituary that I had to share my thoughts and gratitude with his family and friends. I never had the honor of meeting him in person, but after reading the beautiful tribute to him, I can see that he was an unselfish young man who had goals and was achieving them. He was able to truly love his family and country. Love is not a feeling, but an action. It’s putting someone else’s needs or safety before your own. Ryan gave his life to keep all of us safe from the evil that is trying to destroy our country, terrorism. He was brave, selfless, and full of integrity. Even with the heartbreaking grief you all must be suffering, I’m sure you also feel an overwhelming sense of honor that you got to call such a remarkable man son, husband, brother, and friend. Please know that I truly appreciate his sacrifice for me, and that I won’t ever take my freedom and security that he fought to protect for granted. I am eternally grateful to him and all the men and women who serve us. I will keep all of you in my prayers. God bless you all.

I’m so sorry for the loss of a wonderful young man , son , husband and hero . My thought and prayers are with his beautiful wife Holly , his family , friends and all his brothers . Thank you for your service , Ryan .

Heartfelt sympathy. I’m so sorry you’re experiencing so great a loss. From bereaved parents to you. Know we understand and lending a shoulder or an ear any time! My upmost respect to such a fine man protecting my country.

Heartfelt sympathy. I’m so sorry you’re experiencing so great a loss. From bereaved parents to you. Know we understand and lending a shoulder or an ear any time! My upmost respect to such a fine man protecting my country.

So very sorry for the loss of your precious son and husband. Ryan was truly an American Hero.. Thoughts and prayers to all family and friends.

I am so sorry for your loss. He sounds like such a wonderful person. I am sorry that I did not know him. Thank you Ryan for your service.

I am greatly saddened to hear of the loss of your Ryan. I’ve lost a child and only the Lords love can help ease the pain. Prayers with you.