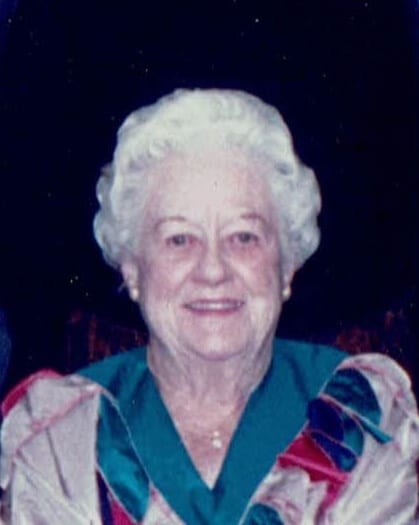 Suzanne was born November 21, 1920 in Wheeling, a daughter of the late Albert Earl and Florence (Kirkland) Hennen. She was a graduate of Mount de Chantal Visitation Academy and a member of St. Michael Parish, Wheeling. She was also the co-owner of the former Goldberry’s Book Store, Wheeling, and served as a nurses aide at The Greenbrier during World War II.

In addition to her parents, she was preceded in death by her husband, Atwood Haning, in 2000; a son, Atwood “Bink” Haning; a brother, Albert “Doc” Hennen; and a sister, Florence Hennen North.

Friends will be received from 2-5 pm, Sunday, at the Altmeyer Funeral Home, Elm Grove Chapel, 154 Kruger Street, Wheeling. Mass of Christian Burial will be celebrated at 10 am, Monday, September 14, 2015, at St. Michael Catholic Church, with Rev. Msgr. Jeremiah McSweeney as celebrant. Interment will follow in Greenwood Cemetery, Wheeling.

The family suggests that memorial contributions be made to the Mount de Chantal Music Scholarship, c/o Wheeling Jesuit University, 316 Washington Avenue, Wheeling, WV 26003, or a charity of the donor’s choice.

Dear Kirk, Morgan and Anne. Sending you and all your family love at this time. Your Mom was a terrific person and I adored her. She is unmatchable. Please take care. Robbie

Dear Krk, Morgan, and Anne. Sending you love at this time. Your Mom was one terrific person and I adored her. She’s unmatchable. Please take care. Robbie

Dear Anne
I was so sorry to hear about you mom. She was always so kind to the gaggle of us teenage girls that hung out at your house. I always remember her laughing when we had a heated game of What’s That On Your Head going on in the living room. RIP Suzy and God bless you and your family.

To Anne, Morgan, Kirk and All the Hanings…….. So sorry we can’t be there but know that our thoughts and prayers are with you at this very sad time . We love you , Aunt Suzy !!!!!
❤️❤️❤️ Kathy, Jeff & Brittany ❤️❤️❤️

I am so sorry for your loss. May “the God of all comfort” help you cope during this difficult time of sorrow… (2 Corinthians 1:3,4) And may his promises found in his word the Bible give you a hope for the future regarding your dead loved ones. You can find more information at http://www.jw.org.

I read of Suzie’s passing this morning. My heart goes out to you, her family. She certainly lived a good fun-filled life. I am taking my WJU golf team to Erie this weekend and will not return until Monday evening. All of you will be in my thoughts and prayers.