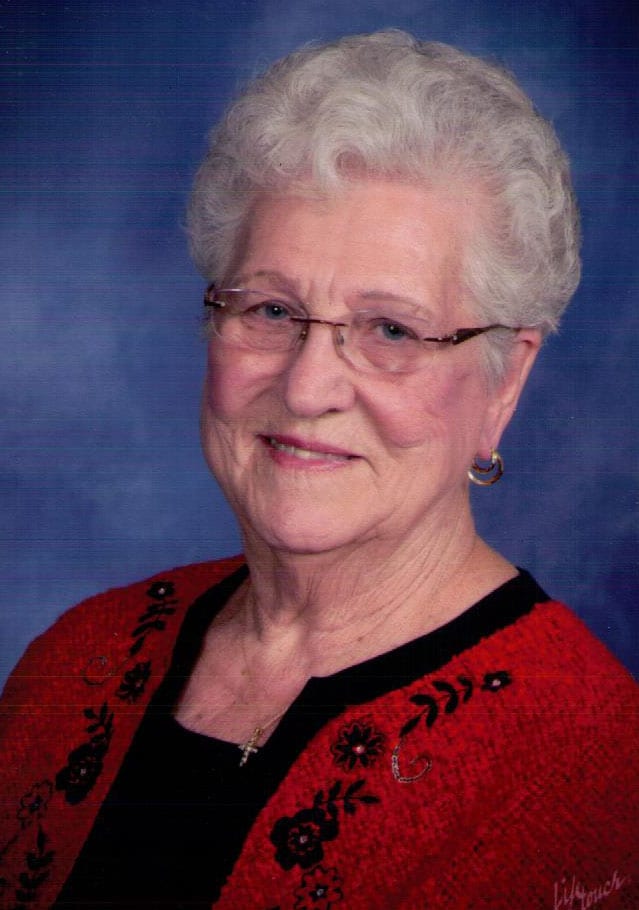 Virginia A. “Jenny” (Herrick) Novel, 87, of Moundsville, WV, passed away January 26, 2017 at Wheeling Hospital.
She was born November 8, 1929 in Proctor, WV, a daughter of the late Albert and Bernetta (Shutler) Herrick.
Jenny was a homemaker and a member of St. Francis Xavier Catholic Church.
In addition to her parents, Jenny was preceded in death by her husband of 66 years, Francis T. “Frank” Novel; eight brothers, Edwin, John, Andrew, Martin, Eugene, Clem, Albert and Tom Herrick and four sisters, Beulah Estep, Lucille Herrick, Rose Goddard and Callista Habig.
Surviving are her four sons, Tim (Carol) Novel, Tony (Dee Dee) Novel all of Moundsville, Mark Novel of Wheeling, WV and Don (Julie) Novel of New Albany, OH; three daughters, Theresa (Bob) Baker of Shadyside, OH; Annette (Alfred) Hackathorn of Cameron, WV; Francine (Barry) Sullivan of Moundsville; sister, Helena Baxter of New Martinsville; ten grandchildren; several great-grandchildren and many nieces and nephews.
Friends will be received from 1-7pm, Sunday, January 29, 2017 at the Altmeyer Funeral Home, Lutes & Kirby-Vance Chapel, 118 Grant Avenue, Moundsville, with a Rosary Service at 6:30 pm. Mass of Christian Burial will be celebrated at 11am on Monday, January 30, 2017 at St. Francis Xavier Catholic Church, Moundsville, with Rev. That Son Ngoc Nguyen serving as Celebrant.
Interment will follow at Riverview Cemetery.
Memorial contributions may be made to St. Francis Xavier Catholic Church at TMCFunding.com.
On-line condolences may be offered to the family at www.altmeyerfuneralhomes.com.

My deepest sympathy for the loss of Aunt Jenny. She seemed as energetic and happy as ever at Aunt Rose’s funeral in Nov. So glad I got to visit with her a little at that time.
Rosie Herrick Bridgeman (Edwin & Eloise’s daughter)

Dear Family: Please accept my belated condolence for the loss of your loved one. To live to be this age is truly a blessing from God. (Psalm 90:10) Imagine your loved one living “forever”. That is what the Bible promises at Revelation 21:4 because one of the things that will be gone is death and Isaiah 25:8 says that “He (God) will swallow up death forever.” For those who have died, God promises they will be resurrected back to earth under peaceful conditions. Your beloved is included in that promise. (Acts 24:15; Psalm 37:11) We can trust God and put all of our faith in him because he does not lie. (Numbers 23:19) To learn the Bible’s answer to the question, “Can the Dead Really Live Again?”, type the following links into your browser to read or listen to the answer: tinyurl.com/mezwv23 and tinyurl.com/jyp4yl4.

I’m so sorry for your loss, such a sweet lady

Donnie: I was sorry to learn of your Mother’s passing. My thoughts and prayers are with you and your family.

My condolences to your family and prayers to you all.

Tony and Dee,
So sorry to hear of your family’s loss.

Tony and family so very sorry to hear of your mom’s passing. Prayers of comfort to you and your family.

Theresa, Annette, and your entire family I am very sorry for your loss. Love and prayers to you.

So sorry for your loss. Your mom and dad were really good neighbors. They will always live on in our memories and never be forgotten. You all will be in our prayers.

Francine and Family, I am truly sorry to hear about your lose. I know how it feels I have lost both of my parents. My thoughts and prayers are with you.