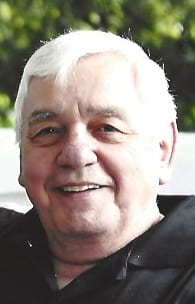 He was born September 26, 1939 in Martins Ferry, OH, son of the late William and Louise Neininger Yeater.

Bill was retired owner-operator of the former Jeannette Construction and a Marine veteran.

In addition to his parents, Bill was preceded in death by his son in law, Robert Swiger and sister, Patricia Smith.

Memorial contributions may be made to Valley Hospice, 308 Mt. St. Joseph Road, Wheeling, WV 26003 or online at www. TMFunding.com.

Dear Jeanette and family, Please accept my belated condolences as I just learned of the loss of your husband and Father. I am so sorry.

My condolences to Aunt Jeanette, my cousins, Uncle Bill’s grandchildren and great grandchildren. Remembering all the good times growing up with my cousins and being at your home. May you RIP!! Love ya, Sheryl

Sorry for your loss. My thoughts and prayers are with the Yeater family and friends. RIP Mr. Yeater!

Jeannette and family, so sorry for you loss. God Bless Bill and your family. May God protect and comfort you always.

I have had the pleasure of knowing the Yeater family through Robert L. Yeater II for going on 9 years now. They have always kept an open home, treating friends and guests like true family members. They are a patriotic, proud, dependable, strong-minded, hard-working, fun and loving people. If the progeny of Mr. William M. Yeater Jr. exemplifies such strong character and true American values, I could only imagine what an outstanding man he is. This Valley has genuinely lost a true gem of its native soil. I did not have the honor of knowing him in this life, but I am sure that I will meet him one day in paradise, and rest assured that his legacy will continue to live on through his beautiful family in their talented and promising generations to come. God Bless you Yeater family, thank you for all that you have done for me, you remain eternally in my prayers. May perpetual light shine upon Mr. William M. Yeater Jr. as he rests in peace. Please accept our sincerest condolences.
Graciously In Christ’s Mercy,

Bill was a great man. He was a positive influence in my life. He and Jeanette always treated everyone like family. My condolences to the family. I know this loss will effect a lot of people God bless

Jeanette & Bobbie, I was so very sorry to hear about Mr. Yeater. Please tell your Mom and the rest of your family how very sorry I am. Know that your family is in my thoughts and prayers.

So sorry for your loss. He was a very nice man. He has a wonderful family.prayers for all of you.

I remember him from when I was a little girl growing up with your children. He was the sweetest person that I remember. God needed some work done up there. Love you all & our thoughts and prayers are with all of you. He will be missed