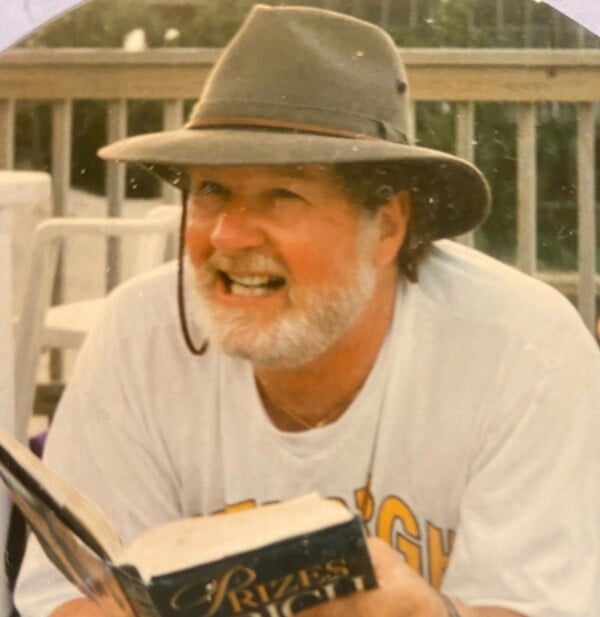 William W. “Bill” Hanna, 81, of Wheeling, WV, passed away peacefully on Tuesday, October 4th, 2022 in the presence of family.

Bill was born on July 9th 1941, son of the late Bill and Susan Hanna of Bethany, WV. He graduated from the Linsly Military Institute in 1959. He attended Bethany College from 1959 to 1963, graduating with a degree in English. At Bethany he met the love of his life, Jane, whom he married in 1965. He later went on to earn a Masters Degree in English at WVU.

A life-long educator, Bill began his teaching career at the Linsly Military Institute in 1964 where he taught high school English. In 1968 he began a thirty-seven-year teaching career at West Liberty State college where he taught English and Journalism, served as the faculty advisor for the college’s student newspaper The Trumpet for many years, and was awarded Professor of the Year in 1977 and 2005. He spent several years helping many people in the Ohio Valley choose what movies to see with his movie review columns “Reel Talk” and “Short Takes” in the Wheeling Intelligencer.

He lived with a fierce passion for many things. He loathed waiting in line, bad grammar, and the general stupidity of humans. He loved a good joke, a good beer, a good Scotch, and a good steak. He loved great literature, most especially the works of William Faulkner and William Shakespeare. He loved his pets throughout the years-his dogs Bonnie, Mark, Corky, Heather, Brutus, Heidi, Skipper, Dolly, Bear, Caddy, Benjy, and Rascal, and his cat Kahuna. He loved his students. He loved good movies. He loved the ocean, especially Sandbridge Beach in Virginia. He loved Buckeye football Saturdays and Packer football Sundays. He loved watching his grandchildren play soccer and baseball. He loved, above all, being with his family and friends laughing and telling stories.

As per his wishes, he will be cremated and scattered on his beloved property at Dawn Ree Drive in Wheeling, WV, where he lived for 51 years with his wife and raised his family. A celebration of life will be held at a later date.

In lieu of flowers, donations may be made in his name to the Ohio County Animal Shelter.

There are two words that come
to mind for this giant of a man – dedication and compassion. They apply to everyone and everything he touched. The world is a better place for the time he was in it, and it is also sadder knowing he is gone.
My condolences to his family.

Mr. Hanna was my journalism professor 1984-88 at West Lib. He recognized my writing ability when I didn’t. That in turn has become a 30 year career writing and communicating as Mr. Hanna taught me to. Gratitude beyond words. Peace and love. Forever.

Boy did I look forward week after week reading Bill’s reviews on movies. I did get to see him at the movie theater at times. My condolence to the family .

Hanna Family: Debbie and I were very sorry to learn of Bill’s passing. Bill and Jane were very dear friends during my tenure at West Liberty.
Bill sacrificed time with his young family to help Debbie and me paint our first house on Walnut Avenue, Wheeling. Only a VERY good friend does that! We will always treasure our many good times together.
We’ll keep the Hanna family in our thoughts and prayers.

I am absolutely heartbroken to hear of the passing of Mr. Hanna, not only my all-time favorite professor, but a very, very dear friend. I can just hear him happily saying: “Hi Bison!” My memories of West Liberty are happy ones because of Mr. Hanna and his dedication to his students, and love of writing, and grammar. He instilled in me a confidence in journalism, as well as a humorous outlook on life. I’ll always cherish my college days being with Mr. Hanna and The Trumpet staff. His caring way with students, and his humor, and zest for life will never be forgotten. He truly valued and loved his family above all. To his wife, children, and grandchildren, I am deeply sorry about your loss. Mr. Hanna will forever be in my heart.

Jane, I’m so sorry for your loss. Bill had a passion for teaching and I will always remember him with great fondness. I was so glad I ran into you both in front of Chambers store after staying in Bethany for my 50th high school reunion! You sure were blessed with that one!! Nancy Harvey Yaeger Dailer

Mr Hanna was my ride to Linsly and a great teacher, RIP sir

He loathed bad grammar. Me too, Mr. Hanna, me too.

Mr Hanna taught me English at Linsly, and West Liberty. I had so much respect for him. So sorry for you lose.