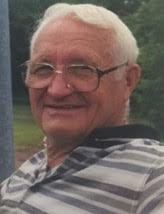 In addition to his parents, he was preceded in death by his loving wife, Pauline C. (Pylypchuk) Logston, one brother, George Logston, one sister, Bessie Martin, and brother-in-law, Paul Pylypchuk.

Friends will be received on Tuesday, May 31, 2016 from 9 am until time of service at 2 pm at the Altmeyer Funeral Home, Benwood-McMechen Chapel, 214 Marshall Street, McMechen, with Rev. Mitch Johnston officiating. Interment will follow in Mount Calvary Cemetery.

Barry I’n so sorry for your Loss of your Dad. Jack and I really like him. Was a very nice man. ❤️

To the Logston family so sorry to hear abouy Bud’s passing, i did’nt get to know Bud that long but i think he was a very nice man to know, we were members of the Iola Club, witch is were i met Bud, he will surely be missed — GREAT MAN — MAY HE RIP.

I just found out today about Bud passing. Please accept my condolences. Bud was always one of my favorites. Sorry I couldn’t get to the funeral home.

There is no greater love than God’s love. Now “Bud” is experiencing that love. My condolences to family members; Barry, Susie, Mary Beth and others. A death in the family is hard to learn to live with. In my own experience, you just have to put one foot in front of the other and keep on walking forward. Prayers to the whole family and dear friends. God Bless!

May your memories of Willis Elwood “Bud” Logston, give you peace, comfort and strength…