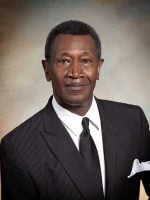 James Martin is a graduate of Wheeling High School and served in the United States Marine Corp. He is a Vietnam Veteran, known to have crossed the equator on the USS Tripoli, achieving the honored tradition of the “Order of Neptune.” One could refer to him as a slimy Pollywog transformed to a trusty Shellback. He is married with three children and twelve grandchildren. He was employed for 40 years with the Wheeling Postal Service, and 30 years of that as a Letter Carrier until retirement. Currently, he is a part-time employee of the “premier” Altmeyer Funeral Home and Crematory in Wheeling, WV.